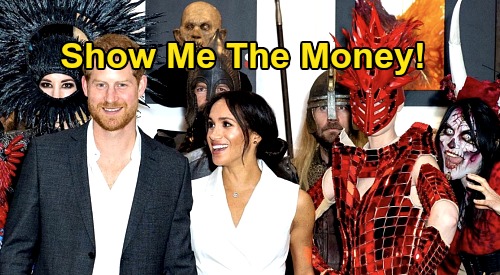 British royals news reveals that Prince Harry and Meghan Markle have made some headway in supporting themselves in their post-royal life. Hello Magazine is reporting that Harry and Meghan have signed on with the Harry Walker Agency, which is the largest and most high-profile speakers bureau in the world.

The Harry Walker Agency also represents clients such as Bill and Hillary Clinton, Barack and Michelle Obama, and Venus and Serena Williams, among others. Speakers of the agency are paid very well, with top-tier speakers garnering up to $500,000 per engagement as they give motivational speeches to organizations, retreats, and the like.

As royal watchers know, Prince Harry and Meghan Markle stepped back as senior members of the royal family this past spring, saying that they wanted to be financially independent. The couple needed to find ways to start paying the bills, including their luxurious digs in the Los Angeles area and the high cost of keeping themselves secure.

Prince Harry and Meghan Markle are both accomplished public speakers, and they will surely be popping up at corporate events, community forums, keynote speeches, and other public gatherings. It is likely that Harry and Meghan will focus on causes that are meaningful to them, such as environmental causes and those involving racial and gender equality.

Earlier this year, Harry and Meghan caused buzz when they visited a JP Morgan event in Miami, and that fueled speculation that they could embark on careers as professional speakers down the line. Prince Harry was said to have given an address at the event.

At any rate, Harry and Meghan’s signing on with the Harry Walker Agency means that they’re moving forward and making headway into their new lives and new self-created roles. We’ll see where they might pop up speaking next! Be sure to check back here at CDL for more British royals news and updates.