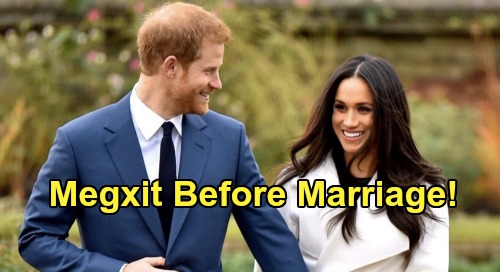 Prince Harry and Meghan Markle will soon be speaking out in a way. The couple is said to have cooperated with the authors of a new book that will be released on August 11th titled “Harry and Meghan and the Making of a Modern Royal Family.” The book will “explore the couple’s journey” to making their decision to step back from their royal duties and move across the pond.

Among the bombshells to be dropped in the book is that Prince Harry was “deeply unhappy for a very long time” and that “the seeds of Megxit were sown before they even got married.” According to a source, Prince Harry and Meghan Markle discussed going in in the direction of stepping down from royal duties long before they were married.

One of the authors of the book, Omid Scobie, who is quite close to the couple, recently spoke on the podcast The Heir Pod and said that the book project started about two years ago, and that the book – which he calls a biography – gives a true inside account of Harry and Meghan’s story. Omid said that he had been with Harry and Meghan extensively and had spoken to many people in their lives.

The description of the book, which is published by a Harper Collins division called Day Street Books, says that “few know the true story of Harry and Meghan.” The book promises to reveal little-known details of Harry and Meghan’s life together, and to dispel rumors and misconceptions about the pair.

Back in April, it was reported by the Mail on Sunday that Prince Harry and Meghan Markle had cooperated with the authors Omid Scobie and Catherine Durand on the new book. Specifically, Harry and Meghan were said to have given an interview to the book’s authors. And as a result, one wonders whether the book will be a one-sided portrayal of Harry and Meghan.

According to palace insiders, there are fears that the book will be very flattering to Prince Harry and Meghan Markle, while perhaps settling some scores with the Royal Family as they explain their decision to leave the family and their royal duties…and the candid reasons why.

Indeed, if Prince Harry was deeply unhappy for some time, it would be remiss for the authors not to have asked him why, so Harry might have unleashed some of his royal angst in the book – something that probably won’t make the Palace happy.

It will be interesting to see what other dramatic revelations the new book brings. Do you plan on reading “Finding Freedom: Harry and Meghan and the Making of a Royal Family” when it’s released? Be sure to check back here at CDL for more British royals news and updates.