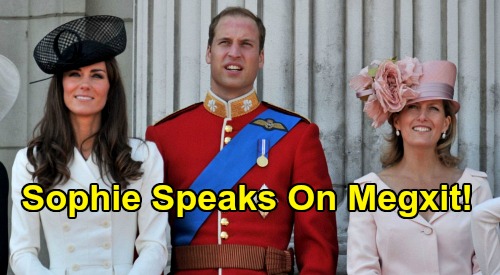 British royals news reveals that the royal landscape has certainly changed in recent months for the royals left behind after Prince Harry and Meghan Markle’s exit. With Harry and Meghan gone, one wonders whether other members of the royal family are doing more to fill the void since Megxit. If so, then one might expect some complaints or ruffled feathers.

Well, it’s certainly been a point of contention for Prince William and Kate Middleton, who have sent threatening letters to Tatler magazine after it published a story titled “Catherine The Great” in which it claimed that Kate felt exhausted with the scope of her royal duties in the wake of Prince Harry and Meghan Markle’s exit.

Prince William and Kate Middleton didn’t like the article one bit, and they let it be known.

Of course, if the magazine is right, then one would probably expect to see various other members of the royal family showing some stress. But for one member of the Royal Family, Countess Sophie Wessex, it seems to be business as usual. Countess Sophie, who is Prince Edward’s wife, recently spoke on the matter, saying that she remains “as busy as I have ever been.”

Countess Sophie told The Sunday Times: “We’ve all got our own little portfolios. I don’t see anything changing, but if we’re asked to do more…I don’t know because it hasn’t really happened.”

Sophie continued, saying: “I’m pretty busy already, so I’m not sure how much more I can do. There are only so many hours in the day. People may pay more attention to what I am doing, but I remain as busy as I have ever been.”

From Countess Sophie’s statement, it doesn’t sound like the individual royal family members are being asked to pick up work/engagements that would have otherwise been done by Prince Harry or Meghan Markle.

We should note, too, that Harry and Meghan aren’t the only ones who has stepped down recently. Prince Andrew was forced to step back due to a public scandal and that had nothing to do with Megxit.

So it seems that Countess Sophie has been, and will remain busy. She’s a royal patron of more than 70 organizations and charities at this point, and this was all developed long before Prince Harry and Meghan Markle left for Canada. Harry and Meghan have since moved to Los Angeles, where they currently reside.

Now, whether other royals – namely Prince William and Kate Middleton – feel the same as Countess Sophie is a big unknown at this point. One could take William and Kate’s strong reaction to the “Catherine the Great” article as evidence either way depending on one’s point of view.

Do you think other royals are doing more as a direct result of Prince Harry and Meghan Markle’s departure? Stick with CDL for all your British royals news and updates – we’ve got you covered!