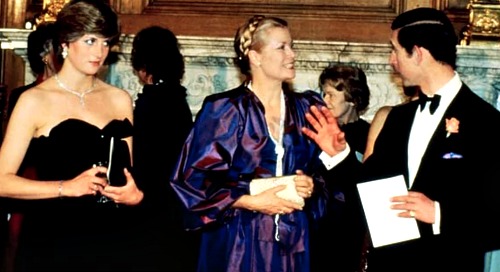 Princess Diana was once comforted by Grace Kelly, but she was also given a warning about what was likely ahead for her as a member of a royal family. The encounter is said to have happened on Princess Diana’s first public outing as Prince Charles’ fiancee, and it was revealed in Diana’s tapes, which were released back in 2017.

Of course, Princess Grace of Monaco had once been known as actress Grace Kelly, but that all ended when she married Prince Rainier III of Monaco in 1956. Princess Grace and Princess Diana seemingly had a lot in common, as they were both outsiders to royal families who became quite famous in their royal roles.

In the 25th Anniversary Edition of “Diana: Her True Story – In Her Own Words” by Andrew Morton, Diana recounted her encounter with Princess Grace. Princess Diana said that Grace had helped her during a musical performance at Goldsmiths’ Hall in March 1981, just a few days after her engagement to Prince Charles was announced.

Princess Diana was 19 years old at the time and she was, according to her own account, uncomfortable in a dress that she thought was “two sizes too small” and not appropriate for the occasion. In addition, the dress was black, which Prince Charles scolded her for, since black is the color of mourning.

As Morton describes in the book, Diana was concerned about how she was handling herself at the event, and Princess Grace noticed and took Diana to the ladies’ room for a talk. Diana said that she talked with Grace about how isolated she was feeling and her fears for the future.

It seems that Princess Diana’s experience that night feeling uncomfortable and unsure about how to act led her to realize what life was going to be like for her going forward, with crowds of people constantly looking at her. Princess Grace then patted Diana’s cheeks and said, “Don’t worry, it’ll only get worse.”

One wonders how often Diana thought about that interaction with Grace, as things did indeed escalate for her in terms of public scrutiny as time went on. Be sure to check back here at CDL for more British royals news and updates.