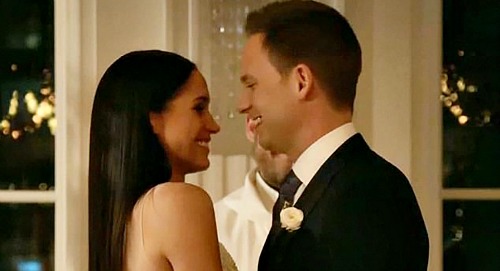 Back when Meghan Markle was acting, long before she met Prince Harry, she had to do things like audition for roles, and apparently the audition for the role that she became famous for didn’t go so well…or so she thought at the time.

Well, when Meghan first went to read for the part of Rachel, she left feeling that the audition had gone horribly wrong. In 2013, Meghan Markle and Patrick J. Adams were interviewed by Larry King about the experience. During the interview, Meghan stated that she thought it was one of the worst auditions she had ever done.

Apparently, Meghan was the last of the central cast members to be chosen, and so she ended up reading with Patrick J. Adams during her audition. She and Patrick knew each other already from working on another television pilot together, and during the Larry King interview, Patrick indicated that right after the audition, everyone knew that Meghan was the perfect Rachel Zane.

Of the audition, Patrick told Larry King: “…When she left, I knew she was nervous and thought she hadn’t done well, and as soon as the door closed, their eyes went wide and they were like, ‘Well that’s it, we’re done.’”

But privately, Meghan was aghast at how the audition went. Sources say that Meghan then called her agent and lamented about how she wasn’t going to get the part. But Meghan was meant to get the part of Rachel, and on August 24, 2010, she was cast in the role.

Author Andrew Morton wrote in “Meghan: A Hollywood Princess” that Meghan later stated that, “I had no idea that they loved my read, they loved my take on Rachel and they were putting together a deal for me. It was a really good lesson in perspective – I think we’re always going to be our own worst critics.”

At any rate, Meghan Markle went on to appear in “Suits” for seven seasons. She then announced her engagement to Prince Harry in 2017, and she subsequently retired from acting.

Meghan and Prince Harry stepped down as senior members of the royal family and are currently residing in Los Angeles. Be sure to check back here at CDL for more British royals updates and news.