Queen Elizabeth Has a Personal Poet, Simon Armitage – Pays Him With Bottles of Sherry 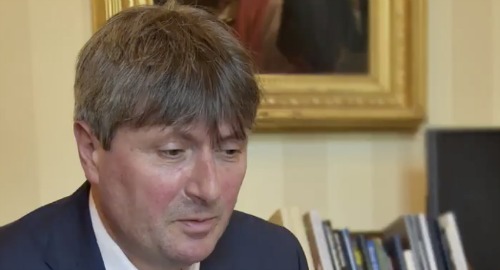 Queen Elizabeth has a position for practically everything one can think of, including a poet. In addition to an annual salary, the appointed rhymer also receives other compensation. One of these perks just happens to be bottles of sherry and it’s not something new. This has been a long tradition within the Royal Household.

Currently, Simon Armitage holds the position and has since May 2019. He replaced Carol Ann Duff and found out he got the job from Theresa May.

If the name doesn’t sound familiar, then Armitage’s poems might. He is well-known for penning To His Lost Lover, The Catch and The Shout.

Pay and Funding the Laurel Prize

Queen Elizabeth’s poet reportedly receives a salary of £5,750. Instead of spending it on himself, Armitage donates his earnings to help fund the Laurel Prize, which doles out awards each year.

According to the Laurel Prize website, a statement from Armitage states, “I am establishing The Laurel Prize as an annual award for the best collection of nature or environmental poetry to highlight the climate crisis and raise awareness of the challenges and potential solutions at this critical point in our planet’s life.”

However, receiving financial compensation isn’t what the poet gushes about the most. After all, the salary is not a lot of money. It’s being given the honor of having the title, being able to work with Queen Elizabeth and the Royal Family. Plus, there are other benefits.

One additional perk of receiving the traditional butt of sack, which equates to approximately 720 bottles of sherry. That’s right, Queen Elizabeth gives her poets booze! Don’t worry, they don’t get all the alcohol at once. It is customarily doled out during their 10-year tenure.

According to The Sun, the poet explains that he will mostly give the bottles of sherry as gifts or prizes. He may even use them to raise money for poetry-related causes. However, he did admit that once in a while, he may enjoy some himself.

The position of royal poet is not a new one. Ben Jonson penned poems for James VI and Charles I. However, the first official Poet Laureate was John Dryden. As for them receiving sherry as part of their payment, that reportedly began all the way back in 1630.

What do you think of Queen Elizabeth having a poet and the individual receiving bottles of sherry as part of the compensation package? Don’t miss all our hot royals news here at CDL. We’ll pass along plenty of updates as other Queen Elizabeth news rolls in.