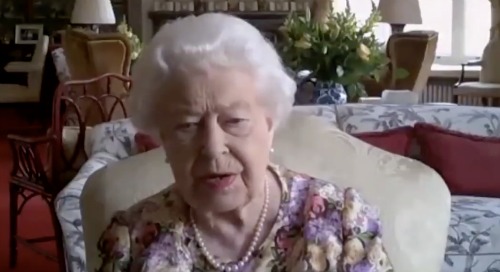 British royals news reveals that Queen Elizabeth has taken part in an historic event – she made her first ever video call as part of her royal duties. Queen Elizabeth and Princess Anne each took part in the call, which they shared with a group of caregivers.

The call was showcased on the @RoyalFamily Twitter feed, which showed some video snippets of the call and was captioned: “To mark #CarersWeek2020, The Queen and The Princess Royal spoke to a group of carers who are supported by The @CarersTrust to find out more about the challenges they face.”

Carers Week is meant to honor caregivers and raise awareness for the approximately seven million unpaid caregivers who watch after sick, frail, or disabled family members or friends. During the call, Queen Elizabeth told the caregivers she spoke with that she was very impressed by what they were doing.

The video call took place on June 4th and included caregivers and the chief executive of the Carers Trust charity, Gareth Howells. Queen Elizabeth was the last to join the Zoom call, as royal etiquette would dictate.

The video montage included some caregivers candidly speaking about their experiences, including some caregivers who had been looking after loved ones since they were quite young. Several members of the group talked about how caregivers have been affected by the coronavirus lockdown.

As the chief executive of the Carers Trust stated in the video, sometimes a little recognition for caregivers can go a long way. Well, the Queen certainly gave the group the recognition that they so deeply deserve.

At the end of the montage, Queen Elizabeth reflected on what she heard. “Interesting listening to all your tales and stories,” the Queen stated. “I’m very impressed by what you have achieved already. I’m very glad to have been able to join you today.”

Followers of @RoyalFamily on Twitter reacted largely with joy to seeing Queen Elizabeth on her first video call. One follower replied to the video by saying: “Aww, I love to see HM The Queen on a video call for such an important cause.”

And someone else said: “The British royal family are very supportive in these difficult times. I love it! Finally, someone commented: “The Queen is on Zoom. Iconic.”

Carers Week is an important way to honor those who look after the more vulnerable among us, and it was great to see Queen Elizabeth and Princess Anne supporting carers. Be sure to stick with CDL for all of your British royals news and updates.

To mark #CarersWeek2020, The Queen and The Princess Royal spoke to a group of carers who are supported by The @CarersTrust to find out more about the challenges they face. pic.twitter.com/ieMyPWlNeV