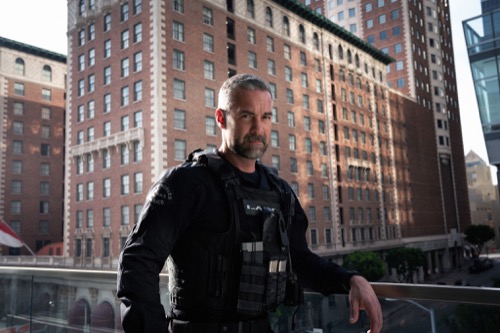 Tonight on CBS their new show S.W.A.T. inspired by the television series and feature film airs with an all-new Wednesday, April 8, 2020, episode and we have your S.W.A.T. recap below. On tonight’s S.W.A.T. season 3 episode 18 called “Stigma” as per the CBS synopsis, “Hondo and the SWAT team race to save Buck, their former unit leader, when he goes off-grid and they fear he plans to harm himself.

Flashbacks reveal the search for Buck, which coincides with one of the team’s most brutal missions, as each team member receives counseling and discusses the untold mental and emotional difficulties inherent to working in SWAT.”

Chris spoke to a therapist. She said something went down and it all started with Hondo. Hondo had been looking for Buck. Buck went off the grid. He wasn’t answering his phone and he wasn’t home when Hondo stopped by to check on him. Hondo grew concerned. He brought in both Deacon and Street. They went through Buck’s things. They also traced a number he called and it was the National Suicide Prevention Line. Buck hadn’t been on the phone with them long. It had been about a minute and so the guys think he hung up before he could receive any help. And so they called in the rest of the team because it was clear Buck was in trouble.

Buck never really recovered after his one mistake on the job. He had shot an unarmed black teenager and he had been fired over it. Buck has tried to move on from his past mistakes. He joined a private security firm because he thought it would lead to a new career for himself and unfortunately, Deacon found out that Buck wasn’t really wanted there. The head of the security firm didn’t want Buck to be the name or the face of the company. He just wanted to use Buck to hiring former and current LAPD officers. Buck realized he was being used. He resigned from the company and he hadn’t told any of his friends.

The team found about it when they spoke with the head of the security firm. They also learned that Buck hasn’t been himself in a while. He was acting oddly on the job and his ex-wife described how bad it had gotten. She said she and Buck had tried to work on their marriage after he left SWAT, but he would drink and he would even hallucinate. He tried to arrest her several times while he was half-asleep. He would bounce her head off the nightstand and so she couldn’t take it anymore. She had to leave him. She had to leave before he accidentally killed her and still she was concerned about him. She had tried suggesting he see someone after their breakup.

Buck refused to believe he needed help. He just kept falling into the black hole he calls a life and so his friends/ the team were worried. They went looking for him. They used their resources to track his movements and they were taking away from the search later on because of a hostage situation. The team was able to resolve that. They did their jobs and they were soon looking for Buck again. They found his storage unit. They noticed his motorcycle was missing. Buck never rode the motorcycle. He simply used to work on it because tinkering with it was how he de-stressed and so he was drunk and driving a vehicle he wasn’t used to.

Hondo and Street believed Buck was trying to kill himself by driving under the influence. Street was worried about his friend and mentor. He was also used to compartmentalizing. He was able to push his worry to the side in order to focus on finding Buck and he and Hondo came up with the idea to track Buck’s credit cards. They needed Hicks’s approval. It wasn’t really by the book and yet Hicks agreed to it because he said he was tired of going to cops’ funerals. He was tracing the credit cards as once again the team was called out on the job. They were tracking the second shooter from a robbery.

They went looking for their shooter. Only they found their suspect, Darby, had already killed a whole family and this time it affected Street. He had a moment as he was cleaning the blood off his shoes. He felt he and the team should have found Darby before he hurt that family. He also believed that he should have seen the warning signs with Buck. Buck has been in pain for a while. He couldn’t have hidden all of it from his friends and so his friend should have seen what was happening. Street flipped out over the Darby thing because he wanted to flip out over Buck. Hondo had to talk him down. Hondo also had to deal with a lawyer showing up at the station.

This lawyer represented a high-profile client. She wasn’t allowed to reveal her client’s identity and so all she could say is that her client wanted to make a million-dollar donation in Hondo’s name. It could be made out to SWAT or whatever other charitable organization that Hondo deemed worthy. Hondo didn’t know what to do with this mysterious benefactor. He was still trying to comprehend it when he finally got in touch with Buck. Buck had been traced to one of his favorite restaurants. Hondo had called the restaurant and he had asked to speak to Buck. He later begged Buck to stay there until he could come to get him and Buck said he couldn’t do that.

Hondo then asked Buck if he was suicidal. Buck chose not to answer the question. He told Hondo that he never blamed him for “it” and he hung up before Hondo could change his mind. Hondo still sent someone to the restaurant. Buck had been gone by the team had arrived and so Hondo kept Deacon on Buck’s trail while he and the others finished their manhunt for Darby. They found Darby at his cousin’s place. They hunted him from there and they put him away. Deacon meanwhile had found Buck. Buck went to the waterfront. He was armed and he had planned on killing himself there.

Deacon had to try his best at talking him down. He tried the old maneuvers he had been taught and Buck saw right through them because he was the one that taught Deacon. He knew Deacon was trying to handle him. So, he pushed Deacon away. Buck wanted to kill himself and he didn’t want to be stopped. Buck still had the gun in his hands when Hondo and Street showed. Deacon, Street, and Hondo were able to talk Buck down. They said they didn’t want to live in a world without him and so they begged to put his gun down. And he eventually did.

Hondo also learned who was donating the money. It was a woman he had saved and she wanted to show her gratitude. He tried to tell her that it had been a group effort, but she didn’t want to hear it and so Hondo found two charities she could donate in his name to.

One of them was his girlfriend’s community center.

Hondo and the whole team also talked to a therapist. They told her about how hard it had been to look for Buck and they all mentioned their own fears and near misses on the job.