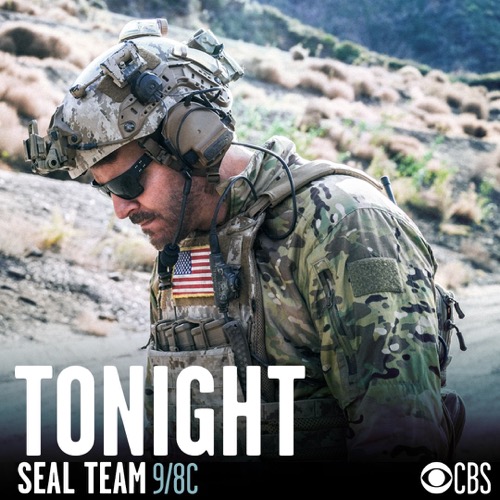 Tonight on CBS their new military drama Seal Team airs with an all-new Wednesday, March 18, 2020, episode and we have your Seal Team recap below. On tonight’s Seal Team season 4 episode 15, “Rules Of Engagement,” as per the CBS synopsis, “The Bravo Team is tasked to protect a group of engineers from America who are building a dam.”

Jason is not himself. He’s jumpy. He jumped when he was with Natalie and he heard someone pressed their horn for too long. Jason didn’t mean to jump. It was a reflex and unfortunately, Natalie witnessed it. She asked him if he was okay. He told her he was. He wasn’t and deep down she probably knew that. Natalie has noticed things. She noticed that Jason isn’t sleeping well at night. She noticed that he shakes and does battle with some faceless phantom whenever he closes his eyes. She tried asking him about it and each and every time he tells her he’s okay. Jason doesn’t open up to her. He pushes her like he did his ex-wife and therein lies the problem.

Jason knew it was a problem. He went to see his therapist and he told to the doctor about Natalie. She wanted to be let it. She’s been doing everything right and so Jason doesn’t know why he’s putting all these walls. He tried to tell himself that he was shielding her. His doctor suggested that was just an excuse and he reminded Jason that Natalie works with SEALs. She’s seen the downside. She has intimate knowledge of what Jason goes through and so he wasn’t shielding her from anything. Jason’s doctor was trying to push through to the real issue when Jason got the call. He and his team were called in.

BRAVO Team was being sent to Niger. Niger is a developing country and the United States has been helping it with its infrastructure. The US, therefore, has an invested interest in the country. They don’t want the Russians moving in on the untapped resources that the country still holds and so they were concerned about Vadik Petrov. Petrov was meeting with Boko Haram. The name is familiar because the man abducted over a hundred school girls a few years back and so the US is concerned about this meeting. They thought Petrov was being sent in to lay the groundwork for Russian involvement and so BRAVO was being sent to intercept him.

This was great for Jason. It meant he could push his issues to the side and it wasn’t so great for Clay. Clay went to a party with his girlfriend. It was a huge shindig and Sonny decided to crash the event. He actually did more than crash it. He found someone pretending to be a SEAL and he pushed him around the bar for daring to spread false stories. Sonny said he had to do it because Clay was too weak to do it. Clay tried to tell him that the guy wasn’t worth notice and normally Sonny would know that as well. This time was different, though. Sonny has been having a problem with Clay going to these parties and he even has a problem with Clay’s girlfriend.

Davis tried to talk to Sonny about it. Sonny danced around the subject with her and he still refuses to admit he’s scared. He scared his friend will leave him behind. He already knows what’s that like with Davis and he doesn’t want that to happen with Clay too. Clay didn’t know that was the problem. He was just upset with his friend that he didn’t see it and his mind was elsewhere. He was thinking about Ambassador Marsden. Her story wasn’t being told. No one knew she was a hero or that she sacrificed herself for others. The news was all running with stories about how she was ineffectual and so Clay felt someone should set the record straight.

Ray told him to drop it. He said nothing good would come from telling the truth. Clay had gotten into trouble over the TBI issue and so he couldn’t afford to upset anyone else. Ray reminded him of that. He didn’t want Clay getting into trouble again and so he told them to think about the mission. BRAVO was told the Russian was a threat to the infrastructure. They believed Petrov and Boko would attack the American Engineers that had put in a dam. It was up to BRAVO to protect these engineers. They created a plan and this plan was to trap Boko’s men. However, Boko’s men didn’t play their part.

They were crafty. They managed to destabilize BRAVO’s position and so that put Jason’s team on the backfoot. They were forced to engage out in the open. They were able to overwhelm Boko’s men and they called in an airstrike. BRAVO believed they killed everyone and that includes known troublemakers. They then moved once they had finished clearing up the scene. They returned home stateside and Clay was called in for a private meeting with Lindell. Lindell believed Clay was destined for big things. He didn’t want Clay settling at just leading his own team one day and so that made Clay think. He’s never had much ambition. His friends like to say he’s been acting differently and he really hasn’t.

Clay has been making waves for a long time. He was finally told he could put that to good use and so he has to consider Lindell’s suggestion. Clay was doing that as Ray was talking to his daughter. He accidentally let it slip that he was more than a mere sailor and so she’s been worried about him. She now knows that he can die at his job. She was worried that would happen when he left again and she could wait to hug him when he got back. Ray tried to tell her that everything was going to be okay. Only he stopped himself. He instead told his daughter that he would always be with her and that was the best he could do.

Ray had tried getting advice from Jason. Jason told him to lie and Ray didn’t want to do it. He wanted his daughter to know him. He wasn’t going to hide behind his work like Jason did and even Jason struggling with that part of his personality. He went back to therapy. His doctor confronted him about his hiding tactics and he warned Jason that he would never get anywhere in a relationship if he put BRAVO first before everything else.

And so Jason has to consider whether or not he wants his relationship with Natalie to go somewhere.