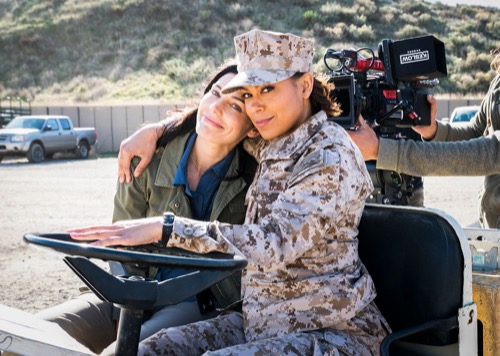 Tonight on CBS their new military drama Seal Team airs with an all-new Wednesday, April 22, 2020, episode and we have your Seal Team recap below. On tonight’s Seal Team season 4 episode 18, “Drawdown,” as per the CBS synopsis, “Bravo Team searches for a new terrorist group leader who is orchestrating violent resistance to peace negotiations in Afghanistan. Also, Clay learns what it means to be a leader and Sonny works to repair his relationship with his father in Texas.”

There have been several key attacks against Taliban leaders. Someone was trying to stop the peace talks and it was believed the man responsible for all of this was Taliban Tribal Leader Akhtar Zahed. He was moving against the others to stop them from working with the United States. He was identified and made a target for the same people he tried to stop. The Americans went after him. They used Bravo Team to track him down to his little hovel and they had him detained. They managed to get him back to an American base with little to no firepower and so Ray took that as a win. He’s been wanting to be safer now that his daughter understands his job.

She worries about him. She doesn’t want him to go to work one day and never come back. It was her concern for him that was making Ray a little more cautious. His team was noticing it as well and they were wondering what happened to the “devil may care” Ray. He said the guy was still around. It was just hard for him to be that guy after he video-calls his daughter and she asks for updates. She asked him if he caught the bad guy. He told her that he did and now it seems like the intel was wrong. The man they picked up wasn’t behind the attacks. He was merely warned about them and so Zahed ended up giving the Americans valuable information.

Zahed even warned them about several men who had been working on the base. One of them was this Murad and Mandy and Davis went looking for him. They found his boss. His boss said that Murad stopped showing up for work with two other guys some weeks back and so that seemed suspicious. David wanted to follow that track. She was doing so when Ray questioned her newfound focus and he tried to give her talk about finding balance. It was a bit hypocritical coming from Ray and Davis told him as much. She’s never questioned the guys. She doesn’t need them questioning her now.

There was also this investigation into the letter about Ambassador Marsden to worry about. Brass feels that someone on Bravo wrote that letter and no one liked their coverup being exposed. The team was going to come under new scrutiny. They were going to be watched like never before and so they needed to do everything by the book. Ray got into a fight with Thirty. Thirty took his daughter’s doll from him and like always he went too far. Ray almost beat up for it. He had been stopped by other members of the team. And Jason was able to talk Ray down from being so very very angry.

Jason also talked to Mandy. He found out she has a new asset on the ground. She used Samim. Samin was the one who employed Murad and the others and so she threatened to pull his vendor license if he didn’t help her. He was going to be her eyes on the inside. He went to a meeting with the threatening Taliban. He listened to their rhetoric and he filmed what it was like at the meeting. They had hidden a camera on him. They saw what he saw and they heard what he heard. Samin listened as the Taliban were shouting death to their enemies. He even caught their arsenal on his camera and so the Americans realized this rebel group was about to make another move.

This resulted in the Americans deciding to make their move first. They targeted everyone at the meeting and they moved to arrest everyone. They even arrested Samin in order to not blow his cover. They also took a bunch of laptops and cell phones so that people like Davis could go comb through them. They needed as much intel as they could get. They would help them find out what the terrorist end goal was and Mandy for one wanted who was in charge. She grilled the men they arrested. She tried interrogating all of them and they gave her nothing. Not one single person had any information they were willing to share.

Mandy came to believe they were mere recruits. She kicked several of them free and she later asked Davis what she found. Davis found evidence of a well-oiled machine. She believes the head of this new organization is working across several countries and with plenty of allies. She said the last time she saw such a rise was with Al-Qaeda. Davis was worried about this new group and she, in turn, worried Mandy. Mandy also realized one of the men had lied to her. She had interrogated a man who identified himself as Elham Wali. He had seemed like some lowly recruit and so Mandy had him released, but that was a mistake on her part.

DIA later confirmed that this “Wali” was in actuality a major player. He’s been speaking to several terrorist organization heads and he’s been getting around. He was someone who could finally provide the answers Mandy was looking for. Only she had already released him. She let him go and now they’ve lost their best lead.

Also, Clay came back. He had been sent away to be taught a lesson and he’s learned it. He knows what its like to lead now. He also knows he needs to think about it carefully before he takes on such a job.