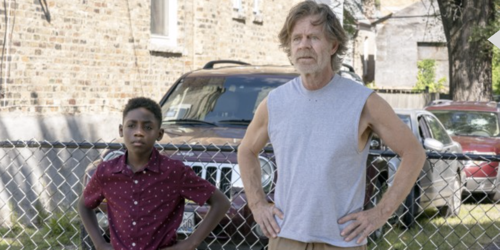 Tonight on Showtime the uniquely twisted and highly entertaining show Shameless returns with an all-new Sunday, January 12, 2020, season 10 episode 10 called, “Now Leaving Illinois,” and we have your weekly Shameless recap below. On tonight’s Shameless episode, as per the Showtime synopsis, “Lip and Tami get a new opportunity; Faye’s actions get Frank in trouble; Ian joins online dating; Carl discovers something from his new work.”

Tonight’s Shameless season 10 episode 10 is going to be great, and you won’t want to miss it. So be sure to bookmark this page and tune in for our coverage of Shameless tonight between 9 PM – 10 PM ET! While you wait for our recap, make sure to check out all our Shameless spoilers, recap, news & more, right here!

Frank wakes up, he is in a car where Faye left him and there are bottles of prescription drugs everywhere. A cop comes to his door and tells him to step out of the car, Frank opens the door and falls out. Fred is crying, Tami’s phone is going crazy with texts. Tami says it is the family group text, his father wants them home for a family meeting – Lip goes to take care of Fred, Tami tells him that he is going to that family meeting.

Debbie wakes up and makes Claudia breakfast, she calls her beautiful, Claudia’s daughter walks by and is going in the shower, she removes part of her towel, she is naked underneath. Debbie pretends to go and call home, she follows Claudia’s daughter upstairs.

Ian goes to talk to Mickey, he wants to do it alone, but Mickey says he can do it in front of Byron. Byron invites Ian to a show, Imperial Mammoth, and tells Ian that he can get him on the list.

Liam is called into the office, he needs to provide proof of residency; his father has to go into the school to sign a form, otherwise, he will be removed from the school and the family investigated by CPS.

Carl starts a new job on a garbage route.

Nurse V’s Jiffy Care is still in full swing, Kev is taking care of a girl’s ankle. V tells Kev that the girls have been approved for financial assistance for the girl’s kindergarten. She goes on to say that they have been invited to an auction at the school and they need to attend.

Frank is sitting on the sidewalk, he tells the cop that none of the drugs are his, the car is not his – he was set up. Across the street, Faye is watching and waves to Frank.

Debbie is about to leave and Claudia asks her if she wants a job, as her personal assistant, $30 an hour and she will give her a car to use. Debbie says she will think about it.

Frank is getting booked into prison, he is talking non-stop and the officer tells him that he does have the right to remain silent. Frank keeps talking, he can’t believe what Faye did to him. Frank bends over and coughs, two pills fall out of his butt, he tells the officer, Faye is good.

Carl is not liking his job on the garbage truck, he doesn’t like the guy that he is working with because he dumpster-dived for breakfast. But when they dumpster for expensive running shoes that someone accidentally threw out, Carl changes his mind.

Ian is getting tones of messages on the dating site since he put a shirtless photo of himself, and he just might have found someone.

Kev and V are at the auction, they find out that they are being auctioned, it’s a date night applicant auction. Kev says they need to get out of there while they have the chance. V and Kev are on stage, V tells everyone that they can offer free drinks at their bar.

The family meeting starts, Tami’s nana was found wandering the streets, so the tough choice was made to put her in a nursing home. Good news, nana’s house is empty and there is no mortgage. The family is giving Tami and Lip the house until they get back on their feet. Kev says he can offer a workout, takes off his shirt and a woman offers $5000.00.

Frank has a visitor, it is Faye, she told them they were married and slipped them $50 to see him. She tells him that he had enough drugs on him that they will put him away for thirty years. He asks her if she will come and visit him in the big house. Faye tells him to take care of himself and that she left him a little something, it is a pill, Frank takes it.

Tami gives Lip the keys to her nana’s house, then asks him if he wants to go see it. Lip doesn’t want to go because the house is in Wisconsin. Tami says it is free, and they have to at least go see it.

Ian is in the bar, he is waiting for his date. V is showing around the couple who won the auction. Kev tries to offer them a drink, the husband says they will skip the drink and meet at their house later in the evening to get to know each other a little better.

Ian’s date shows up, the guy is not what Ian was looking for. Meanwhile, Julia invites Debbie to her prom.

Frank is in court, he pleads not guilty because he was framed; the drug companies did it. Faye is in the audience listening in. The judge agrees with him, she grew up on the south side of Chicago, her own brother did ten years for a trumped-up charge. Frank can’t believe his luck, the judge is on his side, that prison will not cure his illness. Frank has to complete 100 hours of community service and a court-approved addiction program.

Kev and V are talking about the parents who won the auction, V suggests that they swing with them so the girls can get into the school. Kev says that if he has to bang a sexy French lady, then he will.

Lip and Tami are in the car driving to nana’s house.

Carl’s co-workers stop at an open house, they go inside and tell him to wait by the truck.

Debbie tells Julia that she can’t go to her prom. Julia starts crying, she says her mom is so old, she watches Sixty Minutes and she doesn’t know what she sees in her. Julia says she is going to kill herself and tells Debbie she hates her.

Frank is in his new therapy rehab facility, it is a place for rich white people on rehab.

Tami and Lip are in nana’s house, they walk around, Tami says it isn’t that bad. Lip doesn’t look that excited. They check out the garage, Tami says that Lip can work on bikes on the side in the garage.

Debbie is talking to Claudia, she talks about pension and maternity leave. Julia walks in, she has on a hoodie and is packing up things, Claudia asks if she wants Debbie to stay around more. Julia doesn’t answer.

Carl doesn’t stay by the truck, he heads to the house and peeks in the window to see what is going on. His co-workers are hitting the real estate agent in the face, telling him to give what he owes.

Frank is in his rehab course, he starts talking, tells his outlandish story on his drug addiction.

Mickey is at the show, Ian and his date walk in, Mickey sees them and he smiles. Cole, Ian’s date walks away, Mickey approaches Ian asks him what is that. Ian overhears Byron put down Mickey behind his back, he confronts Byron, then punches him in the face. Cole is excited, says he is going to make out with Ian later that night, Mickey punches Cole in the face. Mickey goes over to Ian, who tells him that he loves him and wants to spend the rest of his life with him. Mickey tells him to save the speech, he will marry him.

Kev and V are ready for their swinging, there is a knock at the door, the parents walk in and bring their son. V and Kev are confused. The parents asks to see the roaches and vermin, Kev asks them to explain what is going on. The woman says that they have never been around poor people before, so they wanted to show their son so he wouldn’t end up in a place like theirs.

Debbie is at home, Julia shows up – she tells her the place is a dump. Julia says she has given it some thought and they are going to the homecoming dance together. Debbie says no. Julia, says if she doesn’t, she is going to tell her mom that they made out.

Lip calls a family meeting, he Tami and Fred are moving to Milwaukee; he promises to be around on weekends and holidays. Nobody looks happy about it.