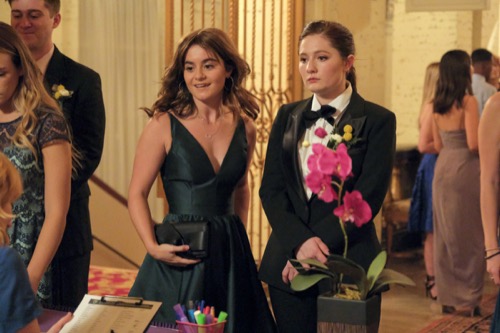 Tonight on Showtime the uniquely twisted and highly entertaining show Shameless returns with an all-new Sunday, January 19, 2020, season 10 episode 11 called, “Location, Location, Location,” and we have your weekly Shameless recap below. On tonight’s Shameless episode, as per the Showtime synopsis, “Frank finds a cushy place to make his new home. Meanwhile, Lip gets cold feet when Tami moves forward with a plan for their future, and Ian sees a new side of Mickey.”

Tonight’s Shameless season 10 episode 11 is going to be great, and you won’t want to miss it. So be sure to bookmark this page and tune in for our coverage of Shameless tonight between 9 PM – 10 PM ET! While you wait for our recap, make sure to check out all our Shameless spoilers, recap, news & more, right here!

Mickey and Ian are in the house when they hear someone shouting outside, it is Mickey’s father. Mickey goes to see him and he tells him that if he marries a man he is going to put a bullet in his head. Both pull a gun on each other, his father walks off and says don’t say that he didn’t warn him.

Ian and Lip are in the kitchen, Ian says that he doesn’t look too excited about Milwaukee, he says he is. Lip sees Liam and asks why he hasn’t gone to school, he says he can’t until Frank signs a form. Mickey is back in the house, he tells him to drop out. Ian can see how Lip feels about Milwaukee, Mickey tells Ian if he makes him move there, he will murder him.

Frank is in rehab, he tells his group that he has turned himself around, he is out of the woods and hopes they all join him there.

V and Kev are walking down the street, he sees a place for rent and says they should rent it, it is just next door to the bar. She tells him to be thankful, he owns a bar, has a hot wife and two beautiful girls. Kev says they can open up a business. Faye is in her Rolls Royce, she says she went to confession, and she wants to see Carl, he told her to let this go. She tells him that she is going to Peurto Rico, when she gets back she will look form, she kisses him on the lips, he tells her safe travels.

Lip walks by a house that a friend wants to fix up and sell, Lip asks him how much he is renting it for, the guy doesn’t know yet.

Carl is still working on the garbage truck. Debbie has a knock at the door, it is Julia and she bought her a gift. It is a tuxedo to wear to the dance.

Kev and V are ready for their swinging, there is a knock at the door, the parents walk in and bring their son. V and Kev are confused. The parents ask to see the roaches and vermin, Kev asks them to explain what is going on. The woman says that they have never been around poor people before, so they wanted to show their son so he wouldn’t end up in a place like theirs.

Debbie is at home, Julia shows up – she tells her the place is a dump. Julia says she has given it some thought and they are going to the homecoming dance together. Debbie says no. Julia, says if she doesn’t, she is going to tell her mom that they made out.

Lip calls a family meeting, he Tami and Fred are moving to Milwaukee; he promises to be around on weekends and holidays. Nobody looks happy about it. Julia tells her it is Claudia’s birthday and reminds her to meet her at the hotel at 7:00 pm and don’t be late.

At the bar, Kev is complaining about getting older, he tells V that they need to expand so they can retire early.

Mickey asks Ian how many people are coming to the wedding. Ian is surprised. Mickey says he is going to make his father more miserable and marry him right.

Claudia is out shopping with Debbie, who invites her out to a birthday celebration that evening. Debbie says she has family stuff and can’t do it. Claudia says it is no big deal, she will celebrate without her, she doesn’t need her girlfriend at her birthday party. Debbie says she will do what she can do. Debbie says there is one condition, she gets to pick the restaurant.

Frank is outside of Faye’s house, he jumps the fence, breaks the window and goes inside.

Carl is on the job, the boss is there, he wants him to break into a house and poop on the living room floor to prove that he is not a cop. Carl goes to do it.

Frank is inside Faye’s house, helping himself to plenty of alcohol. He hears the doorbell, someone is banging on the door. Frank goes downstairs to see who is there, it is Liam. He tells him that he has to sign a form so he can go to school. Frank says he wants to know what is in it for him. Liam says he will call child services and tells them he abandoned him.

Lip is at work, he tells Brad that there is his house for sale, it is a dump, but it could be a good investment, fix it up, then turn it around. Tami shows up, she says that she quit at the salon today. And, she found a salon near nana’s house where she can rent a chair. Tami tells Lip he is being weird. Lip says he just has to close a couple of loops.

Lip is outside the fixer-upper, he shows it to Tami. She says it is a piece of crap. Lip says it is just an option and he feels guilty taking charity from her family. Tami says he must be kidding, it is a 100 feet from his family’s house.

Kev is still thinking of a second business, V is against it.

Frank went to school with Liam, he tells him that he fulfilled his fatherly obligations. Liam says he misses him, Frank says nice tray and laughs when he drives away in Faye’s Rolls Royce.

Mickey and Ian are looking at flowers. When the women find out they are gay, she says she can’t do business with them, it is a sin to be gay.

Lorne, who won the auction at the school where Kev and V wanted them to attend, comes into the bar and wants his workout session. Kev gets up to go outside with him and carry kegs into the bar to get a workout.

Frank pulls up to Faye’s house and hears music, and the door opens. He goes inside and says hello, but nobody answers. Frank grabs a trophy, he thinks an intruder is in the house and he can hit him with it. He goes through the house and finds nobody.

Kev tells V that Lorne told his friends that it was the best workout he ever had, and now tow friends have messaged him. He has found his calling.

Lip is outside the fixer-upper and just stares.

Frank calls Liam, tells him it was great seeing him, and tells him to join him at the house, he misses him.

Ian and Mickey are still making wedding plans, Mickey loses it because nothing is going the way he wanted it to go.

Lip walks in, asks Liam if he found Frank, he says yes.

Claudia and Debbie are at work with her friends. Debbie says she is welder, and the girls say like Jennifer Beals in Flashdance. Debbie makes her excuses, she leaves the restaurant and heads over to the prom.

Ian and Mickey are in the kitchen, Sandy is there and Mickey tells Ian that she is her best man. Ian tells him this is all about Terry and he doesn’t care about weddings. Ian doesn’t have his wedding ring on, Mickey asks why Ian goes to get it. Meanwhile, Frank is in the bathtub and hears a noise, he dresses, has the trophy in his hand and heads downstairs to see what it was. John is there, he is the gardener and Faye asked him to look over the house with she was gone. Frank says he is Faye’s boyfriend and he is calling the cops. John stops and tells Frank he is not supposed to be there, Frank says him too. Frank tells him that he will take upstairs, he can take downstairs, they agree.

Carl meets his boss, tells him that the sanitation department is in bed with the real estate department. It is all overseen by Otis. Carl asks if they are going to bring in the FBI, his boss says no, he wants a piece.

Debbie leaves the prom, heads back to the restaurant – but forgets to take off a corsage that Julia gave her.

Kev is showing off different exercises that they can show the new clients using kegs.

Debbie goes back and forth until Claudia is gone with her guests. When she goes back to the prom, Claudia is on the steps and tells her that she bought the corsage. Claudia says that it was stupid of her to think that a young girl like her would want to have a relationship with her. Julia walks in, she gets into an argument with Claudia. Debbie walks away.

Lip is home, he rented the house. Tami is furious and walks out. He tells her that it would be good for Fred to be around his cousins, both families. In Milwaukee he will have nobody, they will have nobody. His family, this neighborhood, is his support system and his home. He thought he could do it, but he can’t. Tami walks away.

Debbie is with Sandy, she says people are crazy. Carl walks in and says he is an undercover cop, she laughs. He says it is stressful.