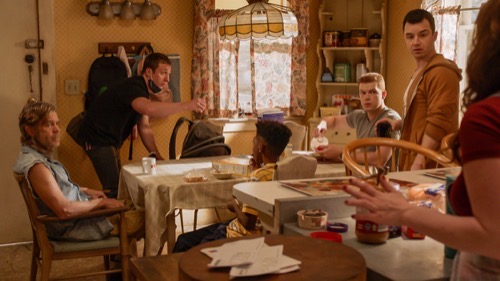 Tonight on Showtime the uniquely twisted and highly entertaining show Shameless returns with an all-new Sunday, December 20, 2020, season 11 episode 3 called, “Frances Francis Franny Frank,” and we have your weekly Shameless recap below. On tonight’s Shameless episode, as per the Showtime synopsis, “In a rush to get out of the house, Debbie loses track of Franny and has to balance her search for Franny with her handy-woman jobs. Meanwhile, Frank and Franny have a day of weed runs and adventure; Ian and Mickey question who is the “man” in their relationship.

A delighted Carl gets a new Training Officer who loves to kick ass; and when Brad and Cami learn about their newborn baby’s health complications, Lip and Tami step in to help.”

Tonight’s Shameless season 11 episode 2 is going to be great, and you won’t want to miss it. So be sure to bookmark this page and tune in for our coverage of Shameless tonight between 9 PM – 10 PM ET! While you wait for our recap, make sure to check out all our Shameless spoilers, recap, news & more, right here!

Lip is changing a light bulb, Tami walks in and tells him that she was at the hospital with Cami and Brad, the baby isn’t eating but the hospital doesn’t seem that worried about it. They are meeting with the doctor in a couple of hours, she asks him to watch Fred so she can be there for Cami.

Ian and Mickey are having sex, Mickey calls him Nick and Ian gets upset and says they are done.

Liam asks Carl how the first day on the job was, he says boring. Meanwhile, Debbie is having a hard time with Franny, she won’t listen to her. Mickey and Ian comes downstairs and Mickey asks who is the man in the relationship, everyone says Ian. Franny goes to the bathroom and when she comes out, everyone but Liam and Frank are left in the kitchen. Liam says he will take her to school, Frank asks if he is chopped liver; Liam says he is high. Frank says he has been high or drunk for every moment in their lives, he thinks he can handle this. Liam then leaves and says ok.

At home, V is taking photos of the girls when Kev tells her that he got the girls some fur coats for the girls and he got them some knock-off Versace jackets. She tells him to return it, he asks her if he can at least wear his for one day and she says yes. They go outside and V notices new rims on the truck, and asks him what the heck he has done.

Frank takes Franny to the wrong school. Carl got himself a new partner, this one is a woman. Meanwhile, Kev is thrilled that the Alibi is open at last, V gives it two weeks until cases spike up again. Mickey walks in and tells Kev he needs to pump some iron in his gym because Ian fat shamed him. V finds out that Kev stores their money throughout the Alibi. Mickey tells them just launder it at the casino, then they can put it in the bank.

At work, Ian asks a married couple for married advice and it takes seconds for them to start arguing.

Cami and Brad find out that there is a whole in their baby’s heart and the surgery costs sixty five thousand dollars. Meanwhile, Frank takes Franny to one of his buyers to get product for V and Kev.

Kev start showing off his money in the neighborhood and ends up getting a gun pulled on him for his money roll in his pocket. We then see Kev running into the Alibi with little clothes on, he tells V that he was robbed, before he cleaned and deposited the money.

Carl finally gets a chance to drive the police car and he is thrilled, looks like he is liking this new partner more than the previous one. Tami calls Lip and tells him that Cami and Brad need a lot of money for the babies surgery. Lip says he has no money but he will her figure this out. Debbie goes to pick up Franny and finds out that she wasn’t at school. Debbie finds out that Frank told her to school.

Carl makes his first arrest and takes a selfie, he sends the photo to Carl. Carl’s boss walks in and tells him to work through his lunch, Ian gets upset and throws some of the food on him, then walks out.

At the Alibi, Kev tells V that the business is too dangerous. Mickey overhears and offers them protection for a cut of their business. Debbie walks in, she is looking for Frank, Kev and V tells her that he is doing pot runs. Debbie is furious that Frank took Franny on his pot run. Ian walks in, he tells Mickey that he quit his job. Mikey makes fun of Ian, the to get into a real physical fight. V breaks it up with a pool stick.

Frank is still out with Franny, Debbie is looking everyone for them. At the Alibi, V asks Mickey and Ian what the heck is going on with them.

Lip is at the hospital with Brad, he tells him that Tami and he are going to try to figure out a way to get the money for the surgery. Brad says he is going to sign up for a payment plan, there is no other way.

Frank is in a tattoo parlor, he got tattoos for he and Franny. His is permanent, hers is not. Frank tells her that he had a really nice day with her. Debbie’s boss calls her, she checked her security camera and caught her stealing food and climbing out of the window. She tells her she doesn’t want to see her again and she is leaving her a bad review. Debbie sees Franny and Frank walking down the street, she stops and starts yelling at Frank.

At home, Carl walks in and says he made his first arrest. Debbie asks who left her kid with Frank. Liam admits it was him. Ian says it is her fault, she shoudn’t have left her child. Lip walks in and tells Debbie to take some responsibility and stop blaming everyone else for her being a shitty mom.

Kev, V and Frank are all getting high together, Frank says grand kids are simple, they don’t expect anything.

Franny knocks on Debbie’s door, she has a dress on and tells Debbie she is ready to take a picture. On the side, we see Frank, she put the dress on for Frank, not for Debbie.