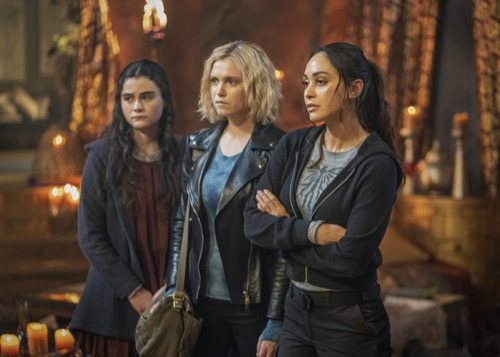 Clarke and some of the disciples arrive to see Murphy, Indra, Russell, and the others. Clarke learns quickly that Russell is not himself and has been taken over by Sheidheda. Russell lunges at Bill who has an invisible soldier stop him. He is wounded. Bill offers him medical help if he doesn’t get in Bill’s way as he looks for the flame.

Murphy tells Clarke Madi is safe. Bill tells Clarke to bring him and his men to the flame. They head there. Gabriel stays behind and tries to help Russell. Gabriel starts to see Josephine and realizes that they need antitoxins as he is already feeling the effects of the chemicals the trees release. It will make them all go mad.

Bill sends Clarke to get the flame while he waits with Murphy and Raven who catches Murphy up on Bellamy and how he has become a disciple. Someone comes over the PA system and announces the threat of the toxins. Bill thinks this may be a trick. Meanwhile, the toxins cannot enter the reactor site where Madi, Emori, and the others are being kept safe. Outside, Raven tells Bill and his men they need to run.

Gabriel continues to hallucinate as he looks for antitoxins. He sees Josephine repeatedly. With another doctor, he finds one last dose of antitoxin. He gives it to the other doctor, telling him they can make more. Gabriel continues to struggle with Josephine telling him he could solve the mystery of the stone. Meanwhile, killer swarms of bugs are attacking the men outside the reactor site. Clarke tells Bill she will give him the flame if he opens the door to the reactor. Echo and Raven, Clarke and Madi hug. Madi hands Bill the flame.

Indra, Russell, and the others are struggling, still exposed to the toxins. Meanwhile, Madi tells Clarke she doesn’t think she should have given Bill the flame. They all wait for the power to return so they can open the door to the reactor area. Emori sees Bellamy. They hug. Before he can tell her that he is a disciple now the lights go back on.

Raven sees that something has broken in the reactor. After she fixes it, Nikki appears and threatens her. She demands Raven admits that she killed Nikki’s boyfriend. Raven cries and admits everything she did involving the radiation leak. Nikki tells her she has to live with what she has done. Clarke and the others comfort Raven.

Indra manages to work with Russell to get them free from the soldiers guarding them. Just as Indra sees her mother due to the toxins, the others bring her the antitoxin. She swings her sword ready to kill Russell but decides she is not going to kill him. She let him die from his wounds. Bill and his men arrive. Clarke is behind them and gets Indra to drop her gun. Gabriel declares that he thinks he can fix the damaged code. Gabriel continues to hear Josephine’s voice. Gabriel looks to be successful until he reads the code.

He takes out his gun and shoots the flame. He disarms Bill and the others. He then asks for antitoxin. Clarke shoots one of the disciples. Bellamy runs to his side. Clarke tells Raven they need to get to their friends but only Bill knows the code. Clarke threatens him by gunpoint. She makes Bill open the bridge back to her friends and makes Bellamy stay. Russell offers to help Bellamy for help in exchange. Clarke sees this and holds them all at gunpoint. She wants the book Bellamy just picked up. She cries as she knows she has to shoot him. She pulls the trigger. Crying, she crosses the bridge.