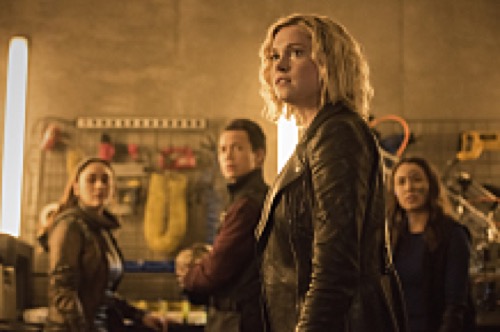 Tonight the CW series The 100  airs with an all-new Wednesday, September 16, 2020 season 7 episode 14 and we have your The 100 recap below. On tonight’s The 100 season 7 episode 14 called, “A Sort Of Homecoming,” as per the CW synopsis, “Clarke and her friends reckon with all that has happened only to find an unexpected threat looming.”

Clarke, Indra, Madi, Bill, and the others are transported to a bunker where they are united with Indra’s daughter and the others. They all hug and step outside onto the green earth. Clarke has to tell the others about Bellamy. She confesses she killed him. She cries, explaining about Madi’s sketchbook to Octavia and the others. Octavia hugs her. Echo also understands.

Everyone meets again in the bunker. Jordan tells them there is no stone and therefore no way out. Raven looks with one of the disciple’s helmets. She sees a way out. Clarke grabs the helmet and smashes it. Earth is their home and she won’t lose anyone else.

Bill reads the mind of Russell. Bill looks over Madi’s sketchbook as they talk. Russell and Bill talk about working together, about getting Madi. Russell only wants Sanctum. Bill tells him about transcending. Russell doesn’t care about that. He tells Bill he will get Madi himself. Bill agrees and brings him to the bridge to cross over.

Nate and Eric are in bed. Nate is upset about Bellamy. Eric comforts him. Meanwhile, Jordan and the others explore the bunker. They drink wine while Gabriel plays the piano. Echo wanders off, needing space. Madi and Clarke get ready for bed. Madi is upset, all of the beds should be filled with people. She is mad that Clarke decided for her, again. She is also mad about Bellamy. The lights in the Bunker turn on.

Indra and Octavia remain outside in the cold. Octavia doesn’t want to go in the bunker, she too will pay penance. Indra is sticking with her. They talk about Octavia’s tough time on another planet. Indra tells her they will face her demons with her. Octavia goes back in the bunker, remembering when she ruled, the chanting, the fighting. Indra talks with her daughter, who apologizes she wasn’t a warrior like Octavia. A green light suddenly appears. The bridge has opened. They don’t see anything but Indra knows someone is here. It is Russell. Octavia heads to want the others.

Octavia tells Clarke. She gets nervous and they head to find Madi who has gone on a walk. Meanwhile, Jordan and Hope are dancing. She gets upset and runs off. Gabriel continues to play the piano with Madi listening. Clarke and Octavia keep looking while an invisible Russell follows them.

Echo vents to a drunk Niylah about Bellamy. Raven works to fix the helmet. John comes across a crying Hope. He checks on her, introducing himself. Jordan interrupts. He tells Hope he is sorry, he may have misread things. They sit and talk. She confesses she was having fun but then she felt guilty. After thinking for a minute, she asks him to dance again. They hear Clarke yelling for Madi.

They all end up in the same room. Clarke explains what is going on. Suddenly the door shuts. Seconds later, Gabriel is stabbed at the piano by an unseen force. Madi is in shock. Russell heads to get Madi but Gabriel manages to intervene. He tells Madi to get help. Moments later, Russell comes out. Indra and Gaia attack him but he stabs himself and disappears.

Clarke and the others break their way out of the room and find Gabriel. They stay with him while he dies. Madi comes running in. She thanks him for saving her life before she runs off without anyone noticing. They head to find her.

Clarke and the others find Madi. She stabs herself in the gut and disappears too after telling them no one else is going to die for her. The bridge opens. They hear a loud bang. Emori runs off to see what it is. The bunker ceilings begin to collapse.