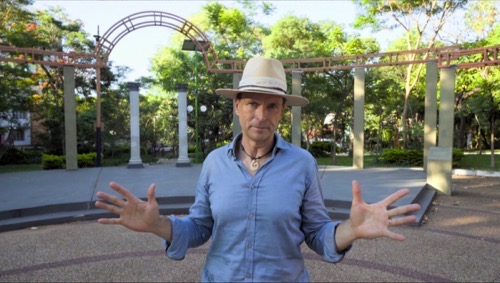 Tonight the CBS series The Amazing Race airs with an all-new Wednesday, November 4, 2020, season 32 episode 4 and we have your The Amazing Race recap below. In tonight’s season, 32 episode 4 called, “Olé, Olé!” as per the CBS synopsis, “Teams race through Asunción, Paraguay, where they must either stack a pyramid of watermelons or perform a traditional Paraguayan bottle dance.”

Wil & James U-turned Leo & Alana in the last round and they plan on paying them back for that. Will & James are the first to leave the Amazon parks and fly more than 1500 miles to Paraguay in the heart of South America. They will then head to the capital city of Asuncion and find their next clue at the Orquesta de Reciclados de Cateura. Hung & Chee are in second place, they are also leaving. There is only one flight and everyone is on it. Will & James notice some 24 computers and use them to print out maps of Paraguay. Then print out four copies for their alliance with Gary & DeAngelo, Hung & Chee, Riley & Madison, Eswar & Aparna.

Teams land and are already having problems when some of the taxi drivers don’t know where the orchestra is located. Riley & Madison are in the first place and get their next clue, “who is feeling instrumental?” This is the landfill harmonic, where every instrument has been made from trash. It was started to help young people stay in school, develop their creativity, and provide a better future. This Roadblock requires teams to figure out how to repurpose items from a landfill to build a cello. When it is music to their ears, they will receive their next clue.

They have an example to follow, they just need to replicate it. The strings seem to be the biggest hurdle. Meanwhile, Kaylynn & Haley are still in the taxi and they think they are lost. Their driver takes them down a dead-end road. Michelle & Victoria are also lost, in a scary neighborhood and they are praying someone else is lost too. Michelle & Victoria finally arrive. The alliance of five teams is helping each other, they are really getting a big advantage of the other teams. DeAngelo & Gary are the first team done and must travel by taxi to Terere Vendor at Mercado 4. At the same time, Kaylynn & Kaley finally arrive at the orchestra.

DeAngelo & Gary arrive and get their next clue, and it is a yield but they choose not to yield anyone. Route Info: Drink up! Teams must prepare the national drink the traditional way and fill up a thermos and carry as a refreshment for the rest of the journey. Next, it’s a Detour. They head to Plaza O’Leary and face the first-ever double switchback; balancing bottles and stacking watermelons. They choose to stack melons because they think it is a strength challenge but it is also a mental challenge. Leo & Alana arrive and see the yield, but since Will & James are ahead of them, they don’t have a chance to use it against them.

Riley & Maddison don’t use the lead either, they know Eswar is having a hard time making the cello and Kaylynn & Kaley arrive really late, so they are confident that they have lots of time. Hung & Chee start with balancing the bottle and change to the watermelons because they find it too hard. Meanwhile, DeAngelo & Gary are having a hard time; it is not as easy as they first thought. Will & James do it, they balance the bottles and dance, they are in first place on their way to the Pit Stop at Plaza Italia, named after the many Italian families who live in the neighborhood.

Will & James are the first team to arrive at the Pit Stop and they have won five thousand each that they can enjoy after the race. Michelle & Victoria also finish the bottle balancing and are second place at the Pit Stop, with Leo & Alana behind them. Kaylynn is still making the celo, she and Kaley are the last team there. Riley & Maddison have finally finished the watermelon challenge and are team number four. After almost four hours, Kaylynn is finally finished the celo. Eswar & Arpana are team number five, Hung & Chee are done the watermelon challenge are team number six.

It is dark, the last two teams are DeAngelo & Gary doing the watermelon challenge and Kaylynn & Kaley doing the bottle challenge. After almost four hours, DeAngelo and Gary are finally done, as well as Kaylynn & Kaley. It is a race to the Pit Stop for the two teams. DeAngelo is team number seven. Kaylynn & Kaley are in the last place, but it is a non-elimination leg. They have a second chance and will face a speed bump in the next leg.