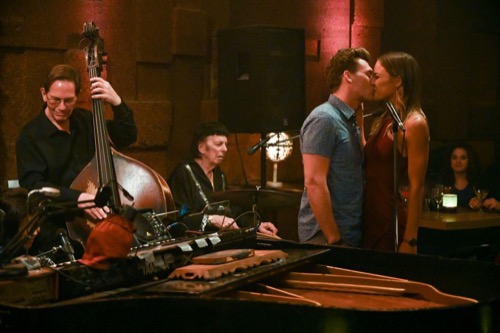 Matt feels relieved that he is still on the show, the guys have the roses this week and he is happy that the woman will have the pressure this week.

It has been over three years that Chris has fallen for anybody, he has been down emotionally all lot, and hasn’t let anyone in.

Chris Harrison arrives in the morning to talk about the week. There are eight men and eight women, there will be newcomers coming. There will be more dates, time to have one and one and forge relations. Chris has the first date card, he leaves it on the table and wishes them a good week, tells them to listen to their hearts. Julia is bonding with Brandon, but she also gave her rose to Sheridan. The date card is for Jamie, “grab your guitar and your guy, go make beautiful music.” Jamie chooses Trevor, and she is so excited. Mel is really disappointed if she doesn’t get to know someone on a deeper level she may be going home.

Trevor and Jamie are in Venice Beach, California. They sit down on the grass and talk, she says she got music from her grandmother. She is used to just being in her bedroom hiding and singing. He tells her if she leads the vocal, he will do the guitar. She thinks it is really sweet that he wants her to be comfortable. Jamie doesn’t think anything can go wrong, he is such a gentleman. In the meantime, another woman enters the mansion; Natasha is 33 from East New York, she doesn’t beat around the bush and says what is on her mind. She is not a diva, but she is a diva.

Jamie and Trevor perform on the boardwalk, she is so happy and never thought she would feel this strongly about someone so quickly. Natasha enters the house, Mel says the shoe has dropped, Natasha is attractive and stands out. Obviously, the woman feels it is their territory and feels intimidated. Natasha starts talking to everyone about Trevor and Jamie, and she asks if that is the Trevor from American Idol, because she is actually friends with his ex and she has heard all the things. Meanwhile, Trevor and Jamie are enjoying their date. His ex told her there were indiscretions and that is why they broke up.

In the hot tub, Jamie tells Trevor that every guy she dated cheated on her. Trevor tells Jamie about his last relationship and he says they just were not compatible and he stayed in it too long because he was afraid to let her down. Back at the mansion, Natasha is giving everyone an earful and a lot of the women are mad, they don’t want Jamie hurt.

Its nighttime, Natasha is still talking about Trevor. Jamie and Trevor are back, they had an amazing time on their date. Jamie felt a really strong connection and knows he was the one she was supposed to be on the date with. The two meet Natasha, she tells Trevor right away that they know each other. She asks him if they can have a chat, and when he wants to get settled first, she tells him they need to have a chat now. Natasha and Trevor sit down, she tells him that she knows Sierra, his ex-girlfriend. She says that Sierra told her that he lied to her and cheated on her.

In the meantime, the women are telling Jamie the same story. He tells her that he didn’t cheat on her, he was un-happy and he emotionally cheated on her. He says he didn’t go into the details about his relationship with Sierra, with Jamie. Trevor says the lying and the cheating didn’t happen. He says there was emotional cheating, and maybe some lying. Jamie is crying, she told Trevor in the hot tub that she had been cheated on by every guy that she has dated. Natasha asks Trevor if he is going to tell Jamie he truth, he says yes. Meanwhile, Jamie is hysterically crying over this.

Another date card arrives, this one is for Bri, “bring the guy who is at the center of your heart.” She gets down on one knee and asks Chris, he feels really special. This is the first real date she is going to have since her engagement ended. They are going into the Guitar Center, this is the most iconic guitar store; it is like a candy store to a musician.

At the mansion, everyone is talking about Bri and Chris, they love the two together and it kind of happened out of nowhere. Chris starts playing the guitar and Bri sings. Chris has never had a connection with anyone like Bri, there is still so much he wants to know about her. She tells him that she was engaged a year ago. She was with her mom, dress shopping and they found it in Milan.

He called her in that second and told her not to buy it. She thinks that some people can be so cruel, to do it to her like that, he obviously didn’t love her. She just wants to find love, and she feels an immediate attraction and connection to Chris. He says he is falling for her to, even though he is afraid to admit it. He is so happy that is Bri is letting him potentially hold a piece of her heart. The two sit down to the piano and sing, “Can’t Help Falling In Love.”

Trevor sits down with Trevor, he tells her that Natasha was friends with his last girlfriend. He reminds her that he mentioned he stayed in his last relationship because he didn’t want to hurt the person, and he ended up hurting them in the long run because there was some emotional cheating because there were some text messages to another girl. He didn’t physically cheat on her. She says that cheating is a deal-breaker for her and she didn’t think he was like that. He says he would be pretty sad if things didn’t work with her because he hasn’t connected with anyone else but her. They hug and tell each other that they really like one another. She says she wants it to work out. He says he is sorry again, she didn’t deserve this after they had such an amazing day. They kiss. Away from him, she says she won’t feel comfortable until she gets his rose.

Another date card arrives, this one is for Sheridan, “choose a woman you are ready to go public with.” Sheridan asks Julia to go on the date with him, she says yes and gives him a big hug. From night one Sheridan has been zeroed in on her and she is excited. She has Cystic Fibrosis and it usually doesn’t go well with dating. Sheridan is happy to get away from the drama and distractions in the mansion. He hopes he can bond with her today and she will forget about Brandon. Danny thinks Julia still has a strong interest in Brandon, but he is rooting for Sheridan.

Ai the mansion, Matt and Rudi are bonding and she is hoping she can get to sing with him one day.

Sheridan and Julia are asked to perform live, they literally have minutes to prepare. They do an amazing job, throughout the whole song, Sheridan holds her hand, at the end of the song, she kisses him.

At the mansion, can smell the tension in the air, something is about to go down. Two more women arrive in the house; Mariana is 23, a Leasing Agent from Dallas, TX, and Ruby is 25 and she is a Private Music Instructor from Austin, TX.

Mel is interested in Brandon, but he is a hot commodity right now. She has a hard time opening up but knows she has to do it or she is going to be going home. Mel hasn’t met anyone like him. He tells her that he grew up in a family that hugged all the time. She says hers was the opposite. He challenges her to hug more often and tells her that his arms are wide open. Mel hopes for a date, she thinks it will really help them. A new date card arrives, this one is for Savannah, “pick the guy who is hitting all the right notes.” Savannah chooses Brandon to go on her date with her. Mel is broken, she feels horrible. Mel leaves the room and heads upstairs so she doesn’t have to cry in front of everyone.

Savannah and Brandon head to the Dresden, a well-known jazz club in Los Angeles. She feels like she has a connection with Brandon, but there are a lot of women vying for him. He says he had a suspicion that she would ask him on the date.

On the date, there doesn’t seem to be a real connection between the two. Julia and Sheridan have become so close to each other since the date. They are back and both and smiles all over their faces. Julia finds out that Brandon is on a date and even though she had a good time with Sheridan, she can’t help but feel weird. Meanwhile, Savannah and Brandon get up to sing in the jazz bar. He is a much better singer than she is.

Sheridan came into this whole thing skeptical, but he is ready to fall in love again. Julia sits down with him and tells him that she want to be transparent, Brandon and she has been talking and she is not sure if there is anything there, but wants to feel like she can have those conversations. He is blindsided. Even though it sucks, he is still into Julia.

Time for the cocktail party, Chris Harrison tells everyone to secure their place because three women are going home. Mel is hoping to find out where Brandon’s head is at, but so many women are after him. She puts herself out there and she kisses him, way to go Mel. Sheridan is rooting for Mel, but we know he has an interior motive. Julia sits down with Brandon to talk. She tells him that she is torn because she has connections with him and Sheridan. He tells her that he is definitely leaning towards Savannah. She calls her odd. Then she leans in and kisses Brandon.

Time for the Rose Ceremony, anyone guesses what is going to happen.