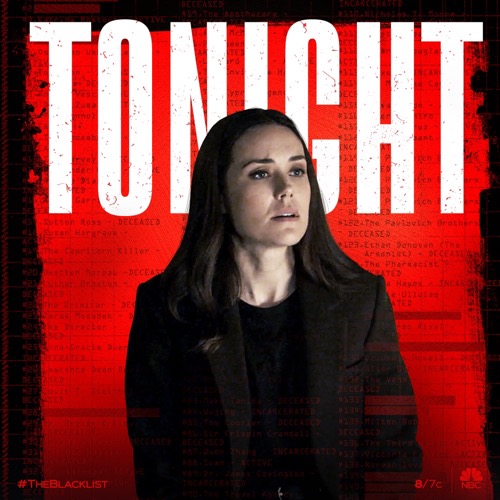 Tonight on NBC their hit drama The Blacklist starring James Spader airs with an all-new Friday, May 15, 2020, episode and we have your The Blacklist recap below. On tonight’s The Blacklist Season 7 episode 19 called, “The Kazanjian Brothers”,  as per the NBC synopsis, “The Task Force investigates an accountant who works for lucrative criminals in order to find the violent and thuggish brothers hired for his protection. Meanwhile, Liz must make a momentous decision.”

Frank Merwin has a briefcase chained to his wrist, he calls a man and tells him that he will be at the chess shop in DC that night. All of a sudden, men arrive in a car, and a lone woman, she tries to shoot Merwin, the Russians in the car grab Merwin and save his life while the NYPD start shooting at them.

Liz is talking to her grandfather while he is clutching to life. Then we see actors Harry Lennix and Diego Klattenhoff who say that back in March they had to shut down production because of the Coronavirus. We see the rest of the actors as well. They say that with the help of some amazing people on their team, they were able to piece together the episode, the season finale of season seven.

The doctor wants to take her grandfather out of the coma.

Liz leaves and walks down the street, she knows she is being followed. She circles back and pulls a gun on him, she tells him that she knows he is working for her, and she wants him to take her where she is. They enter an apartment and her mother is there. She tells her that Dom is off-limits, stay away from him. Katarina tells her not to pick Dom over her, for what he did. Liz tells her that she put him in a coma, Katarina says that he stole her life and betrayed her. Katarina asks Liz if she is on her side, she says she is her daughter. Liz tells her that they both want answers and until she is ready to tell hers, stop following her.

Red is with Dembe, he is not feeling well, he meets up with Liz. They talk about the hit that morning with Frank Merwin, the Kazanjian brothers facilitated his escape. They provide security for criminals. Red says that apprehending the Kazanjian brothers will take two thirsty blood killers off the street. Liz briefs the task force on the case, she tells them that the brothers are the muscle for hire for bad guys. Frank Merwin moves money around the world for criminals. Cooper tells Keen and Ressler to speak to the ex-wife, Park and Aram pull Merwin’s financials to see if they can find anything there.

Liz tells Ressler that her mother is watching her, he tells her to turn her in, she is a wanted fugitive.

Park and Ressler meet with Merwin’s ex-wife. She claims that she doesn’t know anything, except for that he took money from a client and he had to go. In the mother’s room, Merwin calls his daughter and says he doesn’t know when he will see her next. All of a sudden someone bursts into Merwin’s room, his daughter runs into the living room and in front of Park and Ressler, she says she spoke to daddy. Ressler tells her that he is going to need the phone. They end up tracing the phone and find that Merwin was at a hotel.

Ressler and Keen head to the hotel, the person at the front desk doesn’t recognize a photo of Merwin but Keen sees someone suspicious looking at the front door and finds out that he has a room on the sixth floor, she heads up there with Ressler and the police. She goes into the room, it’s clear, they are gone. Ressler is on the stairs and he sees the brothers and Merwin, they shoot. The three-run to the elevator, a woman comes out, they take her hostage. The brothers tell Ressler and Keen that they will shoot the woman if they don’t put down their guns. On a hunch, Keen mentions Katarina’s name, they shoot the woman and leave in the elevator. Ressler calls for an ambulance, Keen runs down the stairs, she is too late. She turns to Ressler and says, “so, this is about my mother.”

Keen tells Ressler that she is positive there is a connection between her mother and the Russian brothers. She calls Red, she tells Ressler that it is time to get out of the middle. They make plans to meet. Dembe asks if Liz knows, Red says she is suspicious. Meanwhile, Aram is on the phone with Red, he has a name, Stanley Birch. Red tells Dembe to pay Stanley a visit, he is the man Mervin was on the phone to in the chess shop. Aram then tells Cooper about Birch, and he mentions that he may have told Red as well.

Dembe gets to the chess shop in time to apprehend the two brothers.

Liz meets with Red, she asks him if the truth is on the menu. She tells him that she knows he gave them the Kazanjian brothers only so that they could find Maddy Toliver, she knows he thinks she is alive. He says he knows that she knows he is not Ilya. She says she is past caring who he is. He asks her why she hired a private investigator then. She starts raising her voice when he tells her that he that Maddy is after all of them. Red falls to the floor, she calls Katarina and asks if she is still having her followed, she is – they take her and Red in the car.

Liz is in the car with Red and Katarina, she tells her that she doesn’t want him to die. Liz tells Katarina that she is tired of the secrets of the two of them. Katarina asks her if she knows what the Sikorski archive is, it’s a blackmail file, it has compromising information on very powerful people. Katarina has been accused of stealing it, Red knows she didn’t and she thinks he knows who did it. Now there is a bounty on her head and there will be until she is dead or can prove that she didn’t take it.

Dembe is one of the brothers while they torture the other one. He tells him that he wants to know where she is. The brother says they are supposed to pay her share of the bounty through a mediator, named Wayne Ott. Dembe really wasn’t torturing the brother, but makes it clear that if he doesn’t get the information that he wants, he will. Dembe gets a call about Red’s condition.

Red is with the doctor, they did a scan, he had cerebral edema, and he won’t tell Liz the cause. Red tells Liz that it was like he had an acid trip with pain. He tells her that he needs to rest. Dembe tells Red that was a risk. Red tells Dembe that he gave Liz bait, to see what side she is on.

Cooper is on the phone with Red, he tells her that he knows about Maddy, and he can’t kill her. Liz is with Ressler, she asks him why Red would tell her about Wayne Ott. Ressler tells Liz that she needs to make up her mind between her mother and Red.

Merwin is dropped off on a road, he has his briefcase and he is walking towards a chopper to getaway. The task force is on to them, Park and Ressler tell him to put the briefcase down, he opens it up and the money flies everywhere; the chopper leaves away from him.

The doctor tells Red that he needs to rest and it’s unhealthy to keep his condition away from people who care about him.

Ott shows up to meet with the brothers; Red thinks Liz is on his side after all.

Merwin is with Park and Ressler in interrogation. He says he is not worried about their case, he will get of jail quickly, he moves money for many powerful people. He also represents corrupt cops, dirty politicians, and judges for sale, all these people want to protect him because they care about themselves.

Red calls Liz and tells her that he has a lead. She says that Merwin refuses to cooperate. He says that Ott was helpful and to be honest, he thought she would call her and take her side. He says he is as happy as a seagull with a French fry.

Liz goes to see Katarina, she tells her that she is not in the middle, but Red doesn’t realize it. Liz says that she is on her side. Liz gets a message that her grandfather is doing better. She goes to see him. She tells him that when he wakes up, he needs to know that the person that did this to him, her mother, is on her side now. Liz says that she is no longer afraid and braces for the truth, she is at peace. Katarina calls her mother and says she is ready.