The Bold and the Beautiful Spoilers: 3 Shocking Reveals Air On New B&B Episodes Before August? 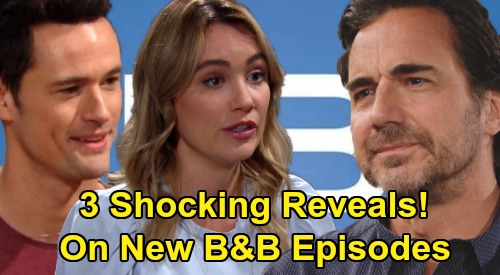 The Bold and the Beautiful spoilers tease that three reveals seem bound to happen on B&B before August arrives. Even if further production delays occur, enough scenes have likely been filmed to allow new episodes to be broadcast by mid to late July.

Viewers last saw their favorite characters in this fictional version of Los Angeles, California, in late April. At that point in the spring a number of storyline questions remained open, with fans eagerly awaiting answers since then. Production since resumed in late June.

Ridge Forrester (Thorsten Kaye) and Shauna Fulton (Denise Richards) were having a fun night on the strip in Las Vegas, Nevada. Kaye’s character left LA with Shauna because he was mad at Brooke Logan (Katherine Kelly Lang).

The desire to learn about Shauna’s life led to a seemingly alcohol enabled series of adventures where the potential Shidge was last observed enjoying themselves on the streets. However, a recent interview with Richards included the actor’s comments about Ridge and Shauna having been married in Vegas!

A confirm of this reveal would seem likely to be addressed in the first fresh episode that airs.

B&B naturally will want to draw as much interest as possible from viewers, both devoted, occasional, and new when the show returns. That makes Thomas Forrester’s (Matthew Atkinson) reappearance more likely than not.

Thomas hasn’t been seen since Hope Logan (Annika Noelle) goaded him into revealing his true intentions during the intended wedding to Zoe Buckingham (Kiara Barnes). Atkinson’s character left his grandfather’s mansion, where the ceremony took place in front of a large crowd.

Thomas’ whereabouts could prove key to whatever his most recent comeback attempt becomes. He may have been staying with his mother, Taylor Hayes (Hunter Tylo), who could return as well.

The above would make sense, as B&B could again write Taylor directly into Brooke’s face. Bridge’s end would be welcomed by Tylo’s character, but she would also confront a new enemy in Shauna.

Bold And The Beautiful Spoilers – Flo Fulton Appears To Be Okay

As fans of this site know, buzz indicates that Flo Fulton (Katrina Bowden) appears to be okay. Bowden’s real life husband is believed to have recently been on the set, where he participated as a double for someone that Flo kisses.

Safety protocols would have necessitated that situation, while also implying that Flo was probably kissing Wyatt Spencer (Darin Brooks) after he found her on the floor of his living room.