The Bold and the Beautiful Spoilers: 5 Heartwarming Outcomes We’d Like To See – Our B&B Wishlist For The Rest Of 2020 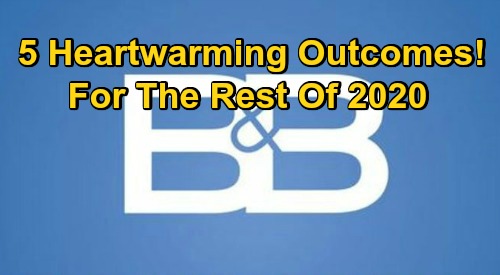 The Bold and the Beautiful (B&B) spoilers tease that the rest of 2020 has the potential to be quite exciting. We certainly have our wish list of what we’d like to see on the show in the next couple of months, and we suspect that you do, too.

But there are a few specific things we’d really like to see going forward. We’ll lay them out one by one, and you can see what you think. Of course, we’re not saying that these things are all likely – they’re just want we’d like to see in an ideal world. Here goes!

First off, it would be great to see John “Finn” Finnegan (Tanner Novlan) included at the Forrester Thanksgiving and Christmas celebrations this year.

The Bold and the Beautiful spoilers indicate that by the time the holidays roll around, Steffy and Finn will be getting pretty serious, so it would make sense for “SINN” to spend their first major holidays together and enjoy it thoroughly.

It would also be nice to see Steffy and Finn’s romance unfold in the holiday season, as Finn enjoys getting to know Kelly Spencer (Colette and Avalon Gray). Steffy and Finn could put up the Christmas tree together, and we’d love to hear all the reasons why Finn and Steffy are thankful for each other at Thanksgiving.

Let’s hope that TPTB play up the holidays right!

Next, we’d like to see Ridge Forrester (Thorsten Kaye) really make an effort to get to know Finn, and vice versa. Ridge would be cute going into protective papa mode, and assuming that he doesn’t pull a “Liam” and grill Finn about why he didn’t catch Steffy’s addiction sooner, we’d be into Ridge giving Finn a friendly third degree.

Who knows, Ridge and Finn could even become buds, which would be great. And let’s face it, it would be humorous watching Liam Spencer (Scott Clifton) have to deal with the fact that Ridge totally approves of Finn for Steffy.

Of course, Steffy doesn’t need anyone to “approve” of Finn for her per se, but it would surely mean a lot to Steffy if Finn and Ridge forged a good relationship.

If there’s one thing that’s been sorely missed from The Bold and the Beautiful over the past few months, it’s been Taylor Hayes (Hunter Tylo).

Of course, scheduling conflicts always occur and can make actors unavailable for comebacks, but Steffy has REALLY needed her mom lately, and it would make such sense for Taylor to be present helping Steffy ease back into taking care of Kelly on a full-time basis.

And Steffy’s not the only one who could use Taylor – Thomas Forrester (Matthew Atkinson) really needs his mom’s presence in his life. Sure, it’s been stated often on the show that Thomas has been in close contact with his mother over the past few months as he’s been working on himself, but that’s some great drama that would make for a great show. We’d love to see Taylor take care of Thomas.

A New Romance For Bill

If things aren’t going to ultimately work out between Bill Spencer (Don Diamont) and Katie Logan (Heather Tom), then TPTB need to cut Bill loose and give him someone new.

It seems that B&B fans may be tiring of seeing Bill ping-pong between Katie and Brooke Forrester (Katherine Kelly Lang), and hopefully that storyline is over. Bill needs to get Brooke out of his system for good, and perhaps Katie, too.

But who would be a good fit for Bill romantically at this point? Would Shauna Fulton (Denise Richards) be a viable option?

Presently, Bill seems to have nothing but disdain for “Shauna the Showgirl,” but it’s possible that he and Shauna could reconnect as they’ll both be lonely and needing a friend. Stranger things have happened.

A Serious Attempt By Quinn & Eric To Save Their Marriage

The Bold and the Beautiful spoilers say that Quinn will soon be needing a place to stay, and that Flo Fulton (Katrina Bowden) will invite Quinn to live with her and Wyatt Spencer (Darin Brooks).

This indicates that Eric is going to toss Quinn to the curb, and we have to wonder whether he and Quinn will ever sit down for an authentic, serious conversation about saving their marriage.

We tend to see a lot of “fallout” on soaps, but rarely do we see couples really take a stab at tackling their problems, like so many real-life couples do when they’re faced with problems. It would be nice to see that happen with “Queric.”

Well, that wraps up our wish list for what we’d like to see on B&B for the remainder of 2020. What would you like to see happen on the show in the near future? Stay tuned to B&B and don’t forget to check back with CDL so you don’t miss any of the hot Bold and the Beautiful spoilers and news.