The Bold and the Beautiful Spoilers: Bill Refuses To Watch Douglas Suffer – Takes Down Thomas To Protect Caroline’s Son?

BY hellodrdavis on February 16, 2020 | Comments: one comment
Related : Soap Opera, Spoiler, Television, The Bold and the Beautiful 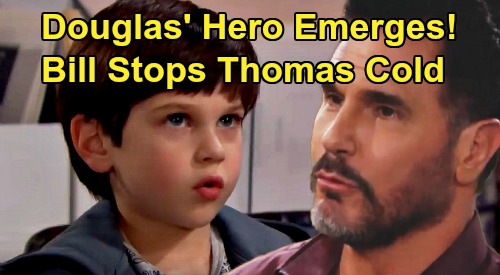 The Bold and the Beautiful (B&B) spoilers tease that Douglas Forrester (Henry Joseph Samiri) is really having a tough time right now. As B&B viewers know, Thomas Forrester (Matthew Atkinson) just seriously upset Douglas when he kissed and canoodled with Zoe Buckingham (Kiara Barnes) during Zoe’s birthday party at Forrester Creations. It was a planned ambush on Thomas’ part, all designed to provoke a reaction from Douglas.

Well, Douglas certainly reacted, and he was quite upset. He immediately questioned Hope Logan (Annika Noelle) about what was going on, wondering why his Daddy was kissing Zoe.

It really took the little kid by surprise, and he immediately started worrying that Hope was going to be taken away from him as his Mommy and be replaced with Zoe. It was a horrible thing for Thomas to do.

Well, Thomas’ manipulation might not be immediately noticeable to Hope, but Liam Spencer (Scott Clifton) certainly knows that the whole Zoe relationship thing is just a ruse on Thomas’ part to manipulate Hope into thinking that she and Thomas should be together.

Liam knows that this is Thomas’ end game, and he’s really frustrated that Hope seems to be falling for it.

Well, recently on B&B, Bill Spencer (Don Diamont) got into some of the details about what Thomas had been up to. He got an earful from both Brooke Forrester (Katherine Kelly Lang) and Liam about how Thomas was still manipulating and trying to pursue Hope.

Bill promptly called Thomas some choice names and was at the same time thinking about Caroline Spencer (Linsey Godfrey) and her legacy in Douglas.

And that got us thinking. Once Bill finds out about how Thomas is purposely trying to cause distress for Douglas as part of a plan to manipulate Hope, he’s not going to be happy about that.

After all, Douglas is half Spencer, and Bill probably feels like he has a vested interested in protecting Douglas from harm. It might be a way he could posthumously make amends to Caroline for all the things he did to her.

Of course, Bill has taken on a new “soft Bill” persona in the past few months, but if he were to learn about Thomas’ treatment of Douglas, he might decide to take on Thomas like the old Bill would.

It would make for some great drama if Bill decided to do battle against Thomas under the guise of protecting Douglas. Let’s face it, Douglas needs someone looking out for him right now, and Bill would be the perfect person to do so.

After all, Bill’s a man of action, and he could probably come down on Thomas in ways that we can’t even fathom. While Liam is focused on exposing Thomas so that Hope “sees” the truth, the harsh reality here is that Hope probably won’t believe anything that Liam uncovers at this point.

Hope’s too involved in the situation, plus now she totally distrusts Liam, since he kissed Steffy Forrester (Jacqueline MacInnes Wood).

But Bill could take a devious route that Liam would never imagine taking. Bill could get Justin Barber (Aaron D. Spears) or another henchman involved and set Thomas up somehow, or bug him and get him on tape ruminating about his obsession with Hope.

Or he could go the old-fashioned route and threaten Thomas with some sort of irreparable harm, which would be fun to see.

And wouldn’t it be fascinating for Thomas to have to go up against someone who’s actually his match? Let’s face it, Liam just can’t seem to stand up to Thomas, and Brooke seems to be more interested in protecting Hope than destroying Thomas. But at Bill/Thomas battle would be formidable and would be a true war!

Do you think that Bill will start looking out for Douglas and take on Thomas? Keep on watching the Bold and the Beautiful and check back with CDL for all your B&B spoilers, recaps, and news.