The Bold and the Beautiful Spoilers: Bill Reunites With Brooke – Drawn to Damsel-in-Distress After Thomas and Quinn Attack?

BY Heather Hughes on January 30, 2020 | Comments: one comment
Related : Soap Opera, Spoiler, Television, The Bold and the Beautiful 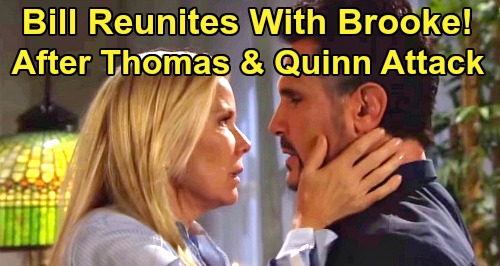 The Bold and the Beautiful (B&B) spoilers tease that Bill Spencer (Don Diamont) will be a major player as a battle heats up. B&B fans know Thomas Forrester (Matthew Atkinson) once vowed to rid the Forresters of the Logans. He wants them out of Forrester Creations and as far away from his family as possible – with the exception of Hope Logan (Annika Noelle), of course.

As for Brooke Forrester (Katherine Kelly Lang), Thomas loathes her most of all. He’ll soon focus on his Logan takedown plot, which will have Brooke at the center of it.

Thomas will want to team up with Quinn Forrester (Rena Sofer), but she’ll have her own plan cooking up. Whether Quinn and Thomas join forces or not, this probably isn’t going to end well for Brooke.

Quinn seems to be gearing up for an awfully devious move. Brooke’s recent behavior reminded Eric Forrester (John McCook) of when Brooke was battling alcoholism. He doesn’t want Quinn doing anything that might contribute to Brooke’s downward spiral and lead to those same sobriety struggles.

Naturally, that’s most likely what Quinn’s going to do! She’s made it perfectly clear that Brooke’s not going to win. Brooke may end up drunk and on a dark path soon, so who’s going to be her knight in shining armor?

It could be Eric since he’s been catering to Brooke’s wants and needs lately, but there’s another possibility to consider.

Bill’s relationship with Katie Logan (Heather Tom) is on solid ground, but how long will that last? The Bold and the Beautiful spoilers say Bill will be doting and overly attentive in an upcoming episode.

Katie will be impressed, but this seems more like a sign of trouble to come. The calm before the storm! That’s especially true since we know Bill will fiercely defend the Logan women – and Brooke’s place within the Forrester family in particular.

The Bold and the Beautiful fans have seen Bill reunite with Brooke enough times to know she’s always going to be an option. It may not be long until Bill’s gazing at Brooke adoringly saying, “Oh, Brooke! It’s you…it’s always been you…” Bill could easily view Brooke as a damsel in distress in all the chaos ahead.

Whatever the case, we know Bill will be heavily involved in all the Brooke, Quinn and Thomas drama. It’ll be interesting to see if that might lead to a “Brill” reunion and another sister war with Katie.