The Bold and the Beautiful Spoilers: Brooke’s Ultimate Revenge – Breaks Up Quinn’s Marriage – Steals Eric For Herself? 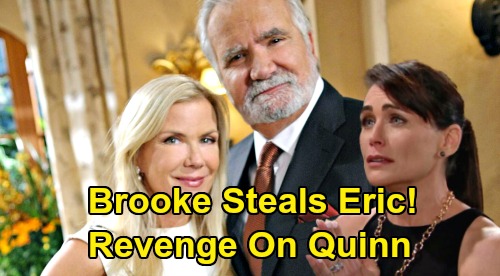 The Bold and the Beautiful (B&B) spoilers tease that things have really been heating up between Brooke Forrester (Katherine Kelly Lang) and Quinn Forrester (Rena Sofer). After Brooke hurled insults and Quinn and slapped Shauna Fulton (Denise Richards), Quinn hauled off and slapped Brooke, which in turn prompted Brooke to get in Quinn’s face and declare war.

Well, from here it looks like things could really get ugly. It seems that Quinn will have a pretty clear path – she’ll probably try to do everything in her power to make Brooke miserable, which will almost certainly mean making sure that Brooke never gets back together with Ridge Forrester (Thorsten Kaye).

Of course, if Quinn had her way, Ridge would get together with Shauna and leave Brooke far behind.

The Bold and the Beautiful spoilers say that Quinn will get some help from Thomas Forrester (Matthew Atkinson) in her quest to go after Brooke. Thomas will approach Quinn and suggest an alliance between them to go after their mutual nemesis.

Of course, it’s not really surprising that Quinn would go after Brooke, given Quinn’s sordid history.

But what about what Brooke is going to do to Quinn? Brooke is the one who started this whole thing, after all. Once she found out about that Shauna and Ridge had been cavorting and kissing, she totally flew off the handle and immediately turned her fury onto Quinn.

Clearly, Brooke has unresolved anger for Quinn from back when Quinn and Ridge had their kissing phase a few years ago.

So, what could Brooke do to Quinn that would really hurt her? Well, there’s one thing that would totally devastate Quinn at this point, and that would be if she lost Eric Forrester (John McCook) and the lavish lifestyle that she lives now.

Brooke will almost surely do everything she can to get Eric to see that Quinn is horrible, toxic, and a part of his life that he should eliminate altogether.

But wouldn’t it sting even more if Brooke were to actually go after Eric herself? Sure, Brooke wants nothing more than to get back together with Ridge, but let’s face it, that reunion just isn’t looking likely right now.

After all, the one thing that Brooke wants Ridge to do, which is to reject his own son, just isn’t ever going to happen. What if Brooke refocuses her efforts and instead romantically pursues Eric again?

That would really irk Quinn, and even if Brooke weren’t able to succeed in getting Eric, it would cause Quinn maximum aggravation and pain, which would be a success from Brooke’s standpoint.

And if Brooke were to succeed in seducing Eric or even stealing a kiss here and there, that would really hurt Quinn.

We’ll see what happens here, but it really looks like the war between Brooke and Quinn will heat up. And if Brooke is going to lose Ridge anyway, what’s to stop her from going after Eric as part of her plot to ruin Quinn?

Do you think that Brooke would go after Eric to spite Quinn? Stay tuned to B&B and don’t forget to check CDL often for the latest Bold and the Beautiful spoilers, updates, and news.