The Bold and the Beautiful Spoilers: Thomas Proposes Alliance With Quinn – Devious Team Takes Down Brooke

BY hellodrdavis on January 18, 2020 | Comments: 2 comments
Related : Soap Opera, Spoiler, Television, The Bold and the Beautiful 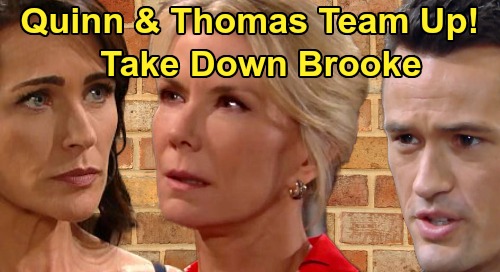 The Bold and the Beautiful (B&B) spoilers tease that Quinn Forrester (Rena Sofer) will soon score a major loss against Brooke Forrester (Katherine Kelly Lang). As B&B viewers know, Eric Forrester (John McCook) recently learned that Ridge Forrester (Thorsten Kaye) and Shauna Fulton (Denise Richards) have shared some kisses. Well, soon, he’ll boot Shauna out of the guest house, leaving Quinn fuming but with no real recourse to do anything about it.

But we all know Quinn, and there’s absolutely no way that she’s going to take this lying down. Now, she probably won’t blame Eric for his decision; she’s almost certainly going to put all the blame on Brooke for what she considers to be a total travesty and an attack on her marriage to Eric.

Quinn will want to make sure that her marriage survives, but she’ll also want to get her revenge on Brooke as well.

Well, it seems that soon, Thomas Forrester (Matthew Atkinson) will get wind of the brouhaha that occurred with Brooke and Quinn. And according to B&B spoilers, that will get Thomas thinking about a potential alliance.

Thomas has already tried unsuccessfully to get Shauna to conspire with him to pry Ridge away from Brooke. But Shauna responded to Thomas’ request with integrity, saying that she didn’t want to work to undermine “Bridge’s” marriage.

But what about Quinn? Long-time B&B viewers will remember exactly what Quinn is capable of. She’s been on good behavior for a long time now, but she hasn’t really been under attack, which seems to be when “devious Quinn” comes out.

Well, now Quinn is definitely under attack by Brooke, and she’s going to be looking for any way that she can to go after Brooke and get her revenge.

What will happen when Thomas approaches Quinn with a proposal for how they can work together to take down Brooke? Even though Quinn seems to enjoy working alone when she goes into Quinn mode, she will probably realize that she needs some help here.

After all, it doesn’t seem like she’s going to get any real support or backup from Eric, and Brooke will clearly have his ear.

Just imagine the trouble that Quinn and Thomas could cause if they worked together against Brooke. They’ve each got a strong vendetta against Brooke, and if they put their manipulative minds together, they could do some real damage for their nemesis.

And if they could somehow get Shauna involved in the mix, wittingly or unwittingly, they’d be a real force!

With Quinn and Thomas working together, they could cause some real havoc, and since they are both master manipulators, they could probably arrange some horrors for Brooke without anyone really knowing. And since they both live in the same mansion, nobody would really think anything of it if they were to see them as they were conspiring.

At any rate, it will be interesting to see what goes down between Thomas and Quinn when Thomas floats his idea for a collaboration. In their minds, Brooke’s really got it coming. What do you think they’ll ultimately do to Brooke? Stay tuned to B&B and don’t forget to check CDL often for the latest Bold and the Beautiful spoilers, updates, and news.