BY hellodrdavis on May 30, 2020 | Comments: Leave Comments
Related : Soap Opera, Spoiler, Television, The Bold and the Beautiful 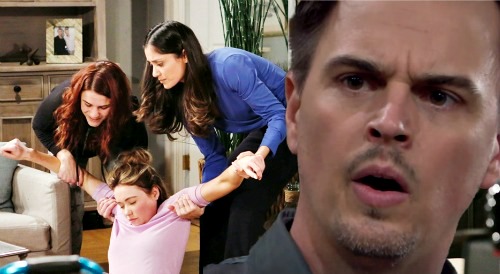 The Bold and the Beautiful (B&B) spoilers has a news update to pass on about when production of new B&B episodes could be resuming on the show. As viewers are well-aware, B&B has been showing throwback episodes for the past several weeks, as new episodes have run out due to the production shutdown. Fans are anxiously waiting to see what happens with their favorite characters once the show resumes filming and episodes are produced.

Well, it all seems to depend on exactly when Los Angeles County – which is where B&B films new episodes – reopens for official business. The entertainment industry is currently in limbo until it gets official word from the state of California that production can resume. But the good news here is that it looks like TPTB at the show are in talks with county officials.

Darin Brooks, who portrays Wyatt Spencer on the CBS soap, recently had a live Tweet session during the airing of one of the show’s encore episodes. It happened to be the episode where Bob Barker (playing himself) ended up beating up Wyatt in front of Liam Spencer (Scott Clifton), and Darin had a lot of fun interacting with fans during the broadcast.

During the live tweet session, a fan asked Darin about the status of filming for the show. Specifically, this fan asked, “Any word on when you may all consider going back to filming again?” Darin responded by saying, “Hopefully soon!! #BoldandBeautiful I know they’re working on it with LA county as we speak! So stay tuned!”

That seems promising, and at least fans can rest assured knowing that talks are ongoing and that the show is working on getting up and running after its prolonged shutdown.

Of course, at this point, the key will be for TPTB at the show and the government officials to find a way to get showbiz back while keeping everyone involved safe. It’s great to know that talks are ongoing.

Meanwhile, fans are wondering exactly what’s going to happen when the storylines do pick back up. Currently, there’s a major cliffhanger in place, as Wyatt has just returned home to the beach house to witness some big scene.

But what exactly he sees is up in the air. Sally Spectra (Courtney Hope) and Penny Escobar (Monica Ruiz) had just been trying to drag Flo Fulton’s (Katrina Bowden) unconscious body to the back room.

Whether Wyatt saw all of that unfolding, or whether he walked in just after Penny and Flo hid Flo’s body remains to be seen…and to be filmed. Let’s hope production begins again soon, so we can get back to watching new episodes of B&B!

Stick with the CBS soap and be sure to check CDL frequently for the latest Bold and the Beautiful news and updates. We’ve got you covered!