The Bold and the Beautiful Spoilers: Don Diamont Wants Bill & Steffy To Reunite – ‘Still’ Reunion On The Way? 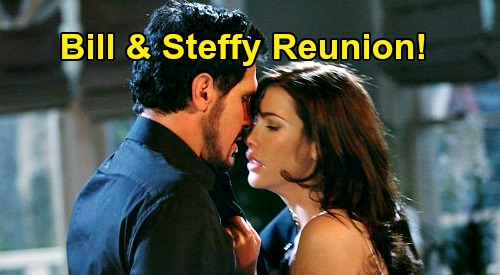 The Bold and the Beautiful (B&B) spoilers reveal that Don Diamont (Bill Spencer) recently did a fun live-tweet and answered some questions from fans. Naturally, Diamont got plenty of questions about Bill’s love life! Romance is a huge part of B&B, so viewers were curious about Diamont’s perspective.

It turns out there’s one pairing Diamont would really like to revisit. The Bold and the Beautiful viewers will recall the time Steffy Forrester (Jacqueline MacInnes Wood) cheated on Liam Spencer (Scott Clifton) with Bill.

That steamy “Still” hookup was certainly memorable! When one Bill and Steffy fan mentioned it being “the hottest scene in the history of B&B,” Diamont decided to respond.

“People love that scene! I love that relationship and hope [they] reunite at some point,” Diamont said. Another Bold and the Beautiful fan wondered if there was any chance of “Still” getting back together, so Diamont weighed in on that comment, too. He tweeted, “Hearing that a lot today! As I said before, love working with Jacqui theres definitely a lot of story to explore!”

It’s clear that Diamont would be on board with another round of Steffy and Bill. Steffy’s single, so it might be a good time for B&B to go for it. That’s especially true since Bill’s relationship with Katie Logan (Heather Tom) is such a mess.

If Bill can’t fix what he broke, he’ll need someone else to move on with eventually. Brooke Forrester (Katherine Kelly Lang) is determined to fix things with Ridge, so she’s not interested in starting up “Brill” again – at least not right now.

Although Steffy and Bill haven’t been in each other’s orbit much lately, The Bold and the Beautiful could still make it happen.

It’d be interesting to see how Liam would react to that news. Liam’s content with Hope Logan (Annika Noelle), but a “Still” reunion could stir up trouble. It might even stir up Liam’s old feelings for Steffy.

There’d be a lot of potential for drama, so Diamont would definitely like to revisit Steffy and Bill – just to see what kind of stories and shockers it might lead to!

People love that scene! I love that relationship and hope reunite at some point #BoldandBeautiful

Hearing that a lot today! As I said before, love working with Jacqui theres definitely a lot of story to explore!#BoldandBeautiful