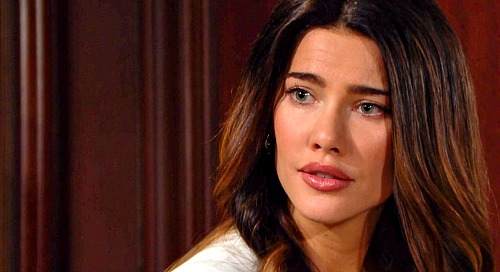 The Bold and the Beautiful spoilers document that Dr. John Finnegan (Tanner Novlan) will soon become Steffy Forrester’s (Jacqueline MacInnes Wood) official significant other. This confirms teasers and what viewers have been recently seeing.

The specific pairing of this duo is believable and is generating obvious chemistry during an increasing number of scenes where both actors appear. As Steffy embraces this new man in her life a conflict also appears primed to develop.

Bold And The Beautiful Spoilers – Steam Is Released

Liam Spencer (Scott Clifton) is Steffy’s three-time ex-husband and the father of her two children, Aspen Forrester Spencer (an uncast role for the miscarried son who died as a result of Steffy’s first motorcycle accident many years ago) and her living child, Kelly Spencer (Avalon and Colette Gray).

So, Finn’s protective support of Steffy will clearly lead to many opportunities where opinion differences will be highlighted.

Kelly’s father is Liam, but Hope Spencer’s (Annika Noelle) presence, as part of Lope’s renewal, has allowed her to have natural interactions with Steffy’s daughter as well.

Now that Liam and Hope are remarried, they are working as best they can to smoothly blend their family, which includes Beth Spencer (Madeline Valdez and River Davidson) and Douglas Forrester (Henry Samiri), with Steffy and Kelly.

Finn is just getting to know and care for Steffy. His learning curve will be steep as she gets him up to speed on the connections with Lope, her brother’s (Thomas Forrester, as played by Matthew Atkinson) backstory, her dad, Ridge Forrester (Thorsten Kaye), and others.

The doctor has already been conflicted. Steffy’s ask for more pain meds was justified, but Finn had to consider the risk of his patient becoming overly dependent on another prescription. He agreed to renew it once more.

The spark between Steffy and Finn was clear. Steffy felt something in her heart when she first saw her doctor while she was recovering from surgery in the hospital.

While her second motorcycle accident thankfully didn’t prove tragic, it did cause broken ribs and other physical challenges to overcome during what Finn projected as a significant period of recovery.

Steffy isn’t the type to ask for help, but she has acknowledged that this particular situation is one where she’s willing to accept it. Kelly remains her main priority, as she placed child’s well-being above her own while trying to tough out what proved to be unbearable and unhealthy pain.

Now that Finn is becoming more than a medical adviser, Steffy senses that a relationship can develop. As it does Liam’s concerns, related to Steffy and maybe Kelly as well, might be softly challenged. And with that sharp daytime conflict can emerge.

To dip or skinny dip? 💦 That’s the question this week on #BoldandBeautiful! Ridge and Shauna are making BOLD moves on all-new episodes of B&B, so don’t miss a minute. 👏 pic.twitter.com/dxOya4xvoX