The Bold and the Beautiful Spoilers: Flo Throws Sally Out of Wyatt’s House – Sets Trap, Tricks Scammer – Shocking Showdown Ahead 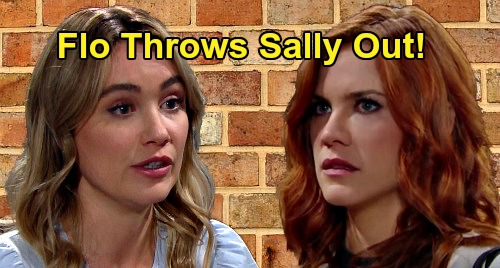 The Bold and the Beautiful (B&B) spoilers tease that a shocking showdown’s coming up between Flo Fulton (Katrina Bowden) and Sally Spectra (Courtney Hope). The more Flo thinks about Sally’s terminal illness story, the more she’ll feel like none of this is adding up. As Flo deals with clues that Sally may be faking her condition, she’ll decide to make a couple of crucial moves.

For starters, Flo will throw Sally out of Wyatt Spencer’s (Darin Brooks) house. As B&B fans can imagine, that news won’t go over well with Sally. She’ll probably argue that if Wyatt wants her to leave, he can tell her himself. It’s Wyatt’s place, so he gets to decide who lives under his roof.

However, Flo may insist Wyatt agrees with her on this. They’ll have talked it over and perhaps reached an agreement by then. Due to Sally’s boundary issues, Flo just won’t think it’s a good idea for her to stay there anymore.

Sally will undoubtedly pipe up about how she’s dying and just wants this time with Wyatt. She’ll wonder if that really so much to ask.

Of course, The Bold and the Beautiful viewers know Sally’s running a scam – and Flo will suspect that’s the case, too. Since Flo won’t know for sure if Sally’s faking, she’ll decide to put the patient to the test.

Flo will decide to play some sort of trick on Sally, which will help Flo determine if there’s any truth to this sob story she’s telling. Maybe Flo will grill Sally about the details of her specific illness or lie about what Dr. Penny Escobar (Monica Ruiz) told her.

Flo might convince Sally that Dr. Escobar spilled something in an attempt to make Sally spill something for real. Basically, Flo will just be looking for any little thing that might trip Sally up. She’ll have a feeling she’s on the verge of discovering this whole thing is a scheme.

Will Sally pass Flo’s test or fail it miserably? The answer should be neither. Sally may keep her story together enough to avoid blowing it entirely, but she certainly won’t do enough to convince Flo she’s dying. The Bold and the Beautiful spoilers say Sally’s strange behavior during this faceoff will make Flo believe she’s on the right track.

As other details become available, we’ll have plenty of updates to share. How do you feel about Flo’s trap for Sally? CDL’s your hotspot for great Bold and the Beautiful spoilers, updates and news.