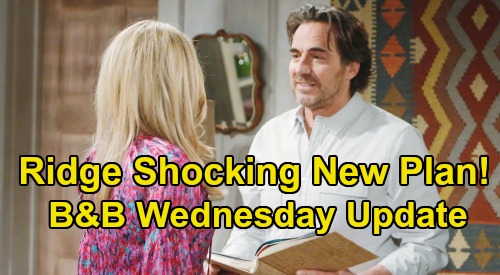 The Bold and the Beautiful (B&B) spoilers update for Wednesday, April 8, teases that Quinn Forrester (Rena Sofer) will hope to undo some the damage she caused. Of course, Quinn has no interest in fixing Brooke Forrester’s wrecked relationship. It’s Quinn’s own marriage that’ll be in need of repairing on Wednesday.

Eric Forrester (John McCook) will express disappointment in Quinn for stooping so low. Quinn made sure that scandalous video of Brooke and Bill Spencer (Don Diamont) was uploaded to the digital frame.

B&B fans know Quinn was thrilled over the public shocker at “Bridge’s” reunion party, but Eric will insist it was uncalled for. There were serious repercussions for Brooke, Ridge, Bill and Katie Logan (Heather Tom).

Quinn’s behavior will be quite troubling to Eric, who doesn’t want to see his wife revert to dark patterns. Although Quinn may offer a lame apology of some sort, she’ll be quick to put the blame where it belongs. Quinn may remind Eric that if Brooke and Bill hadn’t been secretly kissing, there would’ve been nothing to expose.

That doesn’t make what Quinn did right, but Eric will indeed be disappointed in Brooke as well. Quinn’s trash talk should fuel doubts about Brooke’s loyalty to Ridge and whether she still deserves Eric’s support.

However, it probably won’t take long for those doubts to fade away. Eric tends to be a faithful friend to Brooke, so it’s tough to believe he’d ever really turn his back on her.

Other Bold and the Beautiful spoilers say Ridge and Shauna Fulton (Denise Richards) will have a little fun in Vegas. Naturally, Shauna will still battle concerns about Ridge jumping into something new.

In fact, Shauna will even suggest Ridge should call Brooke. Perhaps Shauna will point that Brooke’s probably worried and at least needs updates on Ridge’s location.

After Ridge nixes the idea of getting in touch with his wife, he’ll hope to put Brooke out of his mind and focus on Shauna. B&B spoilers say Ridge will come up with an interesting way to do that.

Shauna should be intrigued by Ridge’s new plan, which will kick off their Vegas adventure and set the stage for some wild drama next week.