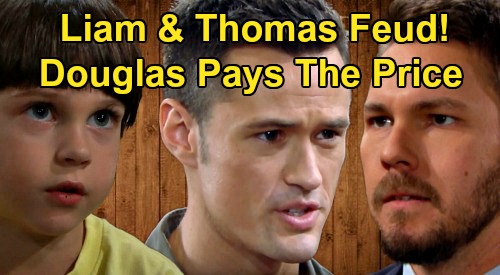 The Bold and the Beautiful (B&B) spoilers tease that a new war will get underway – and Douglas Forrester (Matthew Atkinson) should end up at the center of it! B&B fans know Liam Spencer (Scott Clifton) has promised to protect Douglas along with Hope Logan (Annika Noelle). They’ve made Douglas part of their happy family along with Beth Spencer (River Davidson and Madeline Valdez).

So where does that leave Thomas, who shares custody of his son with Hope? Hope and Liam can’t just decide Douglas is their child to raise without Thomas’ involvement.

They’ll have to take Thomas to court and prove he’s an unfit father. Thomas may be off licking his wounds somewhere for now, but you can bet he’ll come roaring back on a mission to stand against “Lope.”

Thomas certainly wont stand by and let Liam be Douglas’ sole father figure. There’s a good chance Thomas will have turned against Hope by the time he returns as well. Regardless, Thomas has made his hatred for Liam known. The fact that Douglas is so chummy with Liam has to be driving Thomas up the wall.

The Bold and the Beautiful spoilers say Thomas will cause quite a stir with his comeback. We also know Douglas will show a new side of himself down the road, which could easily be sparked by this custody battle.

Hope and Liam would want to shield Douglas from the drama, but they may not be able to. It’s easy to imagine Douglas realizing they’re all fighting over him and acting out because of it. Of course, this new side of Douglas could involve a dark turn. That seems likely since Douglas is typically such a kind and lovable kid.

The only way to really show a change in Douglas’ behavior is for it head downhill fast! Thomas might even add fuel to the fire in hopes of showing Liam’s the worse dad here.

That wouldn’t be true based on how manipulative and abusive Thomas is, but Thomas has proven he’ll stop at nothing to get what he wants – and what he’ll soon want is his son back.

The Bold and the Beautiful spoilers say a fierce father battle is brewing, so Liam and Thomas’ war could affect Douglas big time.

As other B&B updates emerge, we’ll pass along all the latest news. Do you think Douglas will freak over this daddy war between Thomas and Liam? Will Douglas act out as a result? CDL will have more Bold an the Beautiful spoilers, updates and news to deliver.