BY hellodrdavis on January 31, 2020 | Comments: one comment
Related : Soap Opera, Spoiler, Television, The Bold and the Beautiful 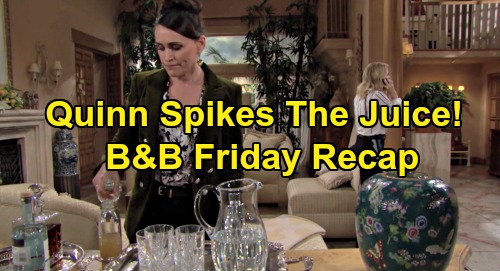 Steffy was exasperated to learn that Ridge and Shauna had kissed a few times, especially after what Shauna and Flo Fulton (Katrina Bowden) had done to her. Ridge noted that Brooke was hurt and had torn into Shauna and Quinn. Steffy said that she used to have issues with Quinn, but it seemed that Quinn had changed. Ridge stressed that the last thing Brooke needed was a war with Quinn.

Meanwhile, at Spencer Publications, Wyatt Spencer (Darin Brooks) debated about sending Sally Spectra (Courtney Hope) a text saying that they should talk and that he doesn’t want to see her hurting. Katie Logan (Heather Tom) then popped in the door looking for Bill Spencer (Don Diamont) and wondered why Wyatt was stressing over a text to Sally. Wyatt explained about the breakup and his reunion with Flo.

Katie was glad to hear about Wyatt and Flo, but she noted that it probably wasn’t easy to break up with Sally. Wyatt said that Sally wasn’t accepting the breakup and that he hated to hurt her. Katie thought that Sally would be ok – after all, nothing keeps Sally down for long and she’s a survivor. Katie then had to get to an appointment, and Wyatt thanked her for the talk. Katie said to trust that Sally was going to be ok.

At the hospital, Sally continued to explain her symptoms to the doctor, and he suggested starting with some texts and bloodwork. He said that he could squeeze her tests in today, but she might have to wait for a bit. He left Sally alone, and she received Wyatt’s text and nearly texted him back asking if he was available to talk now, but she didn’t send the text.

Soon, a nurse came in to say that someone would be in to see Sally soon, and while the door was open, Katie walked by and spotted Sally. Katie came in and said that she had heard about the breakup with Wyatt and that she was sorry. Katie wondered why Sally was at the hospital, and Sally said it was just for a physical, which Katie didn’t believe.

Katie noted that it might help to talk about whatever is going on, and Sally admitted that she feels like there’s something wrong with her and that she’s a little scared. Katie said it was a good thing that she had walked by, and that she could stay.

Next, Quinn and Brooke bickered at the Forrester mansion. Brooke gloated that she had history with Eric Forrester (John McCook), unlike Quinn, causing Quinn to dryly note that you have to learn from history so you don’t repeat it. Brooke barreled on, saying that Quinn would soon be leaving, and that she was a “black widow” whose days as Mrs. Eric Forrester were numbered.

Brooke bashed Quinn for being dark and devious, and she stated that people don’t change – they just get better at hiding who they really are. Quinn then asked if Brooke was still a drunken mess who relied on the bottle, and Brooke scoffed that she doesn’t drink anymore, prompting Quinn to say that people do change, then.

They continued to argue over familiar territory, and Quinn suggested that they could go back to just tolerating each other and exchanging pleasantries at the office and at family gatherings. But Brooke said that she couldn’t go back. Quinn said that Brooke would regret it and that she’d lose if she went up against her, prompting Brooke to say that Quinn was threatening her.

After more bickering, Brooke got a phone call, and she stepped away for a moment. While she did, Quinn went over to the vodka decanter and poured herself a drink, then poured some of the vodka into Brooke’s open orange juice bottle. After Brooke hung up, Quinn suggested that Brooke leave, but Brooke continued on, saying that she was going to expose Quinn to Eric.

Quinn thanked Brooke for that “sobering” warning and said that she’d hold off on packing her bags for now. Brooke then called Quinn more names, all while holding her orange juice bottle and almost taking a sip. Quinn carefully watched and waited for Brooke to take a swig of the vodka-laced beverage.

I know I’ve been M.I.A but here’s the new promo featuring Hope.