BY hellodrdavis on March 26, 2020 | Comments: one comment
Related : Soap Opera, Spoiler, Television, The Bold and the Beautiful 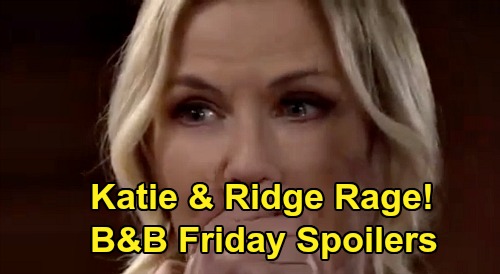 The Bold and the Beautiful spoilers for Friday, March 27, tease that everyone at Brooke Forrester (Katherine Kelly Lang) and Ridge Forrester’s (Thorsten Kaye) reunion party is going to be momentarily stunned. As B&B viewers know, Ridge fished out the digital picture frame from a drawer and reset it with the app on his phone. That caused all of the media on the feed to repopulate, and as Katie Logan (Heather Tom) and Ridge were giving toasts, the video of Bill Spencer (Don Diamont) and Brooke played.

Well, it looks like a major scene is going to occur on Friday’s episode. First off, Ridge is going to want some answers from Brooke. He’s going to be livid, especially since Brooke acted completely aghast back when Ridge confessed to kissing Shauna Fulton (Denise Richards) a few times. B&B viewers will remember that Brooke was livid over those kisses, and she actually slapped both Shauna and Quinn Forrester (Rena Sofer) over it.

Ridge is probably going to be peeved since he came clean about his kisses with Shauna. He might even jump to conclusions and assume that Bill and Brooke had a full-fledged affair, which of course isn’t true. We’ll see if Ridge sticks around to hear Brooke’s explanation for what happened – he could just take off in disgust. But something tells us that he’s going to be heard before he does, and he could even get in Bill’s face.

Next, Katie is going to almost surely going to confront both Bill and Brooke about this horrible betrayal. We can’t forget that Katie has been down this road with Bill and Brooke before, so she’s really going to be upset. In fact, when Katie got back together with Bill the last time, she was very concerned about Bill’s lingering feelings for Brooke, and it took some convincing for her to reunite with Bill.

B&B viewers will remember that Katie was worried about the effect that a future betrayal and breakup could have on Will Spencer (Finnegan George). Katie will probably be overwhelmed with a combination of anger, grief, and sadness that this has happened again, and she’ll probably lash out at Bill and Brooke big time. It should be quite a scene.

And as for Quinn, she’ll just sit back and watch the show unfold. The Bold and the Beautiful spoilers say that she’ll seriously enjoy seeing Brooke’s downfall play out right before her eyes. Brooke will be getting backlash from both Katie and Ridge, and she’ll have been seriously humiliated in front of her entire family. It’s just what Quinn wanted.

But while Quinn enjoys watching the drama play out, it doesn’t seem that her husband Eric Forrester (John McCook) will be too happy about any of it. He’ll probably start putting the pieces together and realize who might have put that video on the feed – after all, he did just show Quinn the app and the link to add media to the digital picture frame.

Ongoing B&B spoilers say that Quinn will finally admit that she’s the one who uploaded the video, and Eric’s not going to be happy about it at all. We could see Quinn have her own fallout from the video, as Eric comes down on her hard for her actions. And of course, Shauna is going to be irritated with Quinn, too, once she finds out that Quinn stole the video from her and caused a spectacle with it.

At any rate, B&B viewers should see some major fallout from the video on Friday’s episode, so be sure to stay tuned to the CBS soap! We’ll keep you updated as more B&B news comes in, and remember to check CDL often for all the hot new Bold and the Beautiful spoilers and updates.