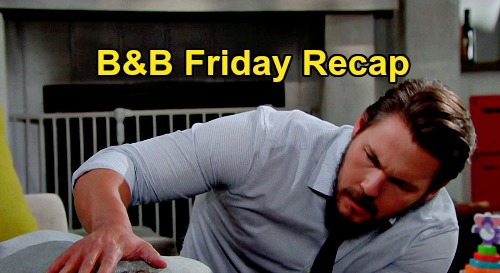 The Bold and the Beautiful spoilers recap for Friday, September 18, reveal that Steffy Forrester (Jacqueline MacInnes Wood) and John “Finn” Finnegan (Tanner Novlan) talked about their kisses at the cliff house.

Hope Spencer (Annika Noelle) stopped by to drop off Kelly Spencer (Colette and Avalon Gray), and as she walked in, she immediately noticed the spark between Finn and Steffy.

Hope smiled, and Finn explained that this wasn’t an official doctor visit – that he was just checking in on Steffy as a courtesy. Hope noted that Steffy seemed much better and back to her old self again.

Steffy got rid of Hope, who was still smiling and eyeballing Steffy and Finn. After Hope left, Finn apologized if that interaction was awkward, but Steffy said that her interactions with Hope were usually that way, Finn noted that Kelly was back now, and Steffy admitted that it was hard being away from Kelly. “And her father,” Finn said factually. 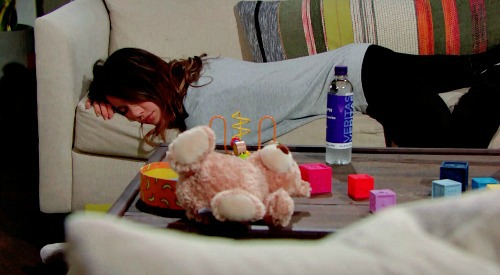 Steffy noted that Liam Spencer (Scott Clifton) had moved on with a life with Hope and that she was trying to accept it. Finn urged Steffy to be patient with herself and give herself time to heal.

Steffy said that she felt that she was definitely moving in the right direction. Thomas Forrester (Matthew Atkinson) then walked in and said hi to Finn, then he wondered if there was something wrong with Steffy’s recovery.

Steffy said that Finn was just checking up on her, and Thomas got the picture quickly. Finn got a text and had to go, and Thomas started looking around the house for something.

Turns out, Thomas had left his wallet at the house earlier, and he quickly found it. Thomas attempted to give Steffy the third degree about Finn, but Steffy promptly shut him down.

Thomas thought it was great that Steffy was moving on from Liam, and he referenced the picture on the wall of Steffy and Liam. Steffy said that the picture was there for Kelly.

Thomas wasn’t having it, and she said that she wouldn’t get into this with Thomas, but Thomas did manage to tell Steffy that Liam was concerned about her relationship with Finn. Steffy made Thomas leave, and Steffy gazed at the picture on the wall.

Later, after Thomas took off, Steffy looked at Kelly on the baby monitor and flashed back to her earlier kisses with Finn. Again, Steffy gazed at the portrait on the wall, then she winced in pain as she tried to move. Steffy found her illegal pain pills hidden in the couch and took one with some water.

At Spencer Publications, Liam and Wyatt Spencer (Darin Brooks) talked business, but Liam was on edge. Wyatt asked what was wrong, and Liam shared his concerns about Finn.

Wyatt thought that Liam should tread lightly when he goes to see Steffy later. “You’re walking into a minefield,” Wyatt said, noting that Steffy was going to think that Liam was jealous.

Liam went on about Finn not being able to be objective about Steffy’s care, and Wyatt didn’t think that “Dr. McHandsome” would drag out Steffy’s treatment just to spend more time with her or anything.

Liam immediately thought that maybe that was possible, and Wyatt reeled. Liam then said that Steffy was vulnerable right now and that it was a difficult time for her.

Wyatt encouraged Liam not to beat himself up about the Hope/Steffy situation from the past, and just then Hope knocked at the door. Hope said that she just dropped Kelly off at Steffy’s and that Steffy seemed to be doing much better…and that It looked like Steffy had a new man in her life.

Liam’s face fell, and the look on Wyatt’s face indicated that he knew trouble was ahead.

Wyatt took off, and Hope and Liam sat and talked. Liam wanted to know about the new guy in Steffy’s life, and Hope described the scene with Finn when she walked in Steffy’s place earlier.

Hope happily said that there was clearly something between Steffy and Finn, and Liam launched into a monologue about how Finn is Steffy’s doctor and can’t be objective.

Hope looked weirded out as Liam explained that he went to see Finn at his office, and Hope pointed out that Finn wouldn’t be her doctor forever and that they should be happy for Steffy.

Liam said that he would be if Steffy was done healing. Liam then said that he’s worried about Kelly, and that Steffy should be focused on her recovery.

Liam left to go to Steffy’s, and soon Wyatt walked in the office to find Hope there alone. Wyatt wondered where Liam was, as he was hoping to stop him before he went and talked to Steffy. “He’s not listening to you, either?” Wyatt asked.

Hope shook her head no. Wyatt tried to explain Liam’s perspective to Hope, and Hope noted that Finn could be the person who helps Steffy get back on her feet.

Back at the cliff house, Liam arrived while Steffy was passed out on the couch. Liam looked in the door and wondered where Steffy was, then he called Steffy and her phone rang, but Steffy kept sleeping.

Eventually, Liam used his key to get in, and he was initially relieved to see Steffy sleeping on the couch. But then, when Steffy wouldn’t wake up, Liam started to panic and checked Steffy’s pulse.

That was a great episode and a great way to round out the week! Stick with the CBS soap and keep CDL at the ready so you don’t miss any of the latest Bold and the Beautiful spoilers, daily episode recaps, and news. We’ve got you covered!