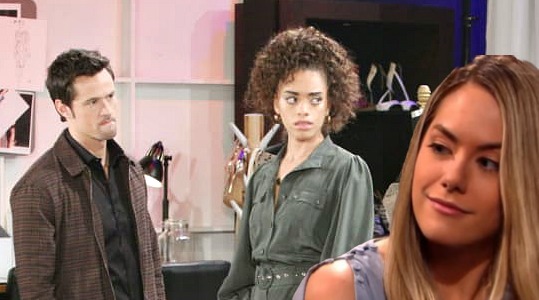 The Bold and the Beautiful (B&B) spoilers tease that Thomas Forrester (Matthew Atkinson) could be on the verge of getting what he wants. Is Thomas sure it’s what he wants though? Thomas is convinced that a future with Hope Logan (Annika Noelle) will make him happy, but maybe he should be careful what he wishes for!

B&B fans know Thomas already won Hope over through Douglas Forrester (Henry Joseph Samiri) once before. Hope didn’t know Beth Spencer (River Davidson and Madeline Valdez) was alive and Thomas was keeping the secret, so the circumstances were a bit different. However, the overall point was the same. Hope didn’t love Thomas, but she married him for Douglas’ sake.

Naturally, that led to frustration when Hope dragged her feet on making love and wouldn’t return Thomas’ feelings. Why does Thomas expect it to be any different this time around? Thomas is still guilt-tripping Hope and tugging at her heart strings through Douglas. He’s trying to sell Hope on the idea of being a family – and that’s not really a love story.

It’s one thing to adore Douglas and want to give him reunited parents. It’s quite another to actually fall for Thomas, which is something Hope may not be fully able to do. Hope’s made comments addressing Thomas’ loyalty – like the fact that he wouldn’t go around kissing other women like Liam Spencer (Scott Clifton). That’s not love either. That’s just Hope being sick and tired of her ex’s waffling tendencies.

Hope does seem to be showing some signs of jealousy now, but even those are up for debate. Does Hope want Thomas deep down or does she not like the fact that he might want someone else? There’s also the whole mommy issue. Hope may be more jealous of Zoe Buckingham (Kiara Barnes) sliding in that stepmom role than anything else.

If Hope ultimately caves in, Thomas may realize he’s made a big mistake. Zoe actually wants to be with Thomas and loves him for him, not just for his kid. Thomas is so caught up in trying to win over Hope that he’s struggling to see what’s right in front of him.

Will Thomas win Hope over only to realize it isn’t what he wants? Will Hope ever be able to give Thomas her full heart like Zoe? The Bold and the Beautiful spoilers, updates and news say things could get complicated, so don’t miss all the action. This B&B storyline’s bound to come with some curveballs!