The Bold and the Beautiful Spoilers: Hope & Wyatt Reunion, Free Him from Flo & Sally Triangle – Better Off Battling Liam? 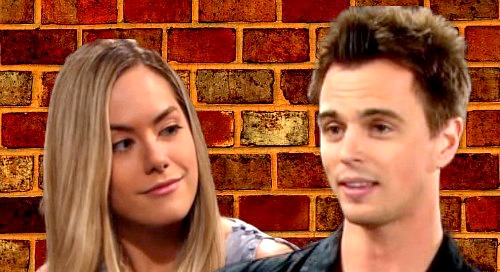 The Bold and the Beautiful (B&B) spoilers tease that Wyatt Spencer (Darin Brooks) could use a romantic reboot. Wyatt has two women who want to be with them, but neither one is a good option at this point. For starters, we’ve got Flo Fulton (Katrina Bowden). B&B has been trying to sell fans on the idea of Flo and Wyatt being some amazing love story, but it’s just not working.

A rewrite made Flo and Wyatt high school sweethearts, but it felt forced from the start. To make matters worse, Flo posed as the fake birth mother who helped keep Wyatt’s brother from his child. Liam Spencer (Scott Clifton) was hurt along with two exes Wyatt cares deeply for – Hope Logan (Annika Noelle) and Steffy Forrester (Jacqueline MacInnes Wood).

Flo’s redemption story came along when she gave Katie Logan (Heather Tom) a kidney, but was that enough? It’s great that Flo came through for Katie and allowed Will Spencer’s (Finnegan George) mom to stick around.

Wyatt was understandably grateful for that, especially since Katie is also his former flame and has been in a relationship with his dad, Bill Spencer (Don Diamont).

Even so, it felt like The Bold and the Beautiful wanted to wave a magic redemptive wand. Wyatt forgave Flo too quickly and burned Sally Spectra (Courtney Hope) badly in the process.

Unfortunately, Sally isn’t a much better love interest these days. She looks downright pathetic for faking a terminal illness to be with Wyatt – a man who’s repeatedly rejected her.

Many B&B fans would just like to see this love triangle end completely. There’s really no one to root for here. Is it time to let them all break free? Should The Bold and the Beautiful go for a different love triangle instead?

Although viewers may not be keen on watching the Spencer brothers battle it out again, it’s a tried-and-true recipe for soapy drama. Should B&B revive Wyatt’s love triangle with Liam and Hope?

It might be worth revisiting now that Annika Noelle is playing Hope. Maybe Noelle and Brooks’ fresh chemistry could put a new spin on things.

Wyatt and Hope fans have been patiently waiting for their reunion to come around. “Hott” deserves another shot! Steffy supporters might also approve since Liam and Wyatt would be busy fighting over Hope. That’d free Steffy up for a new man and let her avoid another round of Spencer heartache.

As other B&B news becomes available, we’ll deliver the more updates. Would you like to see Hope and Wyatt reunite at some point? Is Hope a better love interest for Wyatt than Flo or Sally? The Bold and the Beautiful spoilers say some shockers and shakeups are brewing, so stay tuned. CDL’s the place to be for exciting Bold and the Beautiful spoilers, updates and news posts.