The Bold and the Beautiful Spoilers: Liam Hears Wedding Bells Again – See If Steffy or Hope Will Be Next Bride? 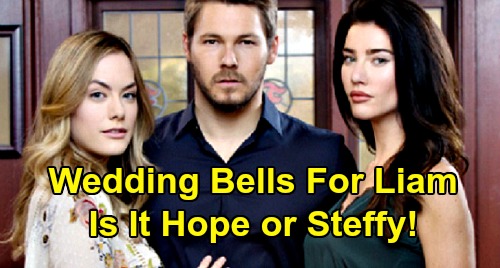 The Bold and the Beautiful (B&B) spoilers tease that Liam Spencer (Scott Clifton) is long overdue for a wedding – at least by B&B’s standards! They’ve taken Liam to the altar plenty of times, so does he have a 2020 wedding brewing? It’s a possibility to consider since Liam often seems so eager to tie the knot.

To be fair, Liam tried to slow things down with Hope Logan (Annika Noelle) this time around. He didn’t even seem to have a proposal on his mind until Thomas Forrester (Matthew Atkinson) goaded him into it.

However, now “Lope” has fallen apart and that leaves Liam a couple options. Liam can hang in there and eventually count on Hope to forgive him or he can move on with Steffy.

That’s a tough dilemma for Liam, who loves them both. The Bold and the Beautiful spoilers say Liam, Steffy and Kelly Spencer will continue to reconnect as a family unit. There’s no denying that Liam will enjoy it, but he may find it difficult to turn his back on Hope.

Steffy also has this big secret she’s keeping from Liam, which involves Thomas notifying her of Hope’s arrival. She kissed Liam in that exact moment because she knew Hope would be there – and that moment destroyed Liam’s relationship.

Since the secret’s bound to come out sooner or later, it’s just a matter of whether Liam’s willing to get past it.

That probably depends on what’s truly in Liam’s heart by then. If Liam starts to believe that everything worked out for the best, it might be easier for him to accept Steffy’s actions. That doesn’t mean he won’t blow up at first, but he can tolerate the secret a bit better if he feels it turned out like it should.

Then again, it might be significant that B&B gave Steffy this secret to begin with. After all, the story would’ve worked just as well with a soapy coincidence.

Steffy could’ve just kissed Liam at the worst possible time by chance, but that’s not what The Bold and the Beautiful writers chose to go with. They set “Steam” up for a blow that could end them before their reunion’s even solid.

Also significant in deciding whether it will be Steffy or Hope who Liam next marries we should mention Scott Clifton’s recent interview in SOD. Clifton was very clear that he thought Hope was the love of Liam’s life.

It leaves the door open for Hope and Liam to potentially work things out down the road. Regardless, Liam will inevitably remarry at some point. When he does, who will exchange vows with him? Will it be Steffy or Hope?