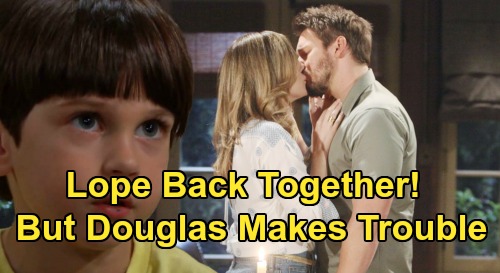 The Bold and the Beautiful (B&B) spoilers tease that Thomas Forrester (Matthew Atkinson) may have created a little monster. Of course, it’s not Douglas Forrester’s (Henry Joseph Samiri) fault that he’s been manipulated, but his way of thinking has indeed shifted thanks to his dad. Thomas has brainwashed this kid into thinking that the perfect “Thope” family is the only path to happiness.

B&B fans can expect Thomas to face his downfall soon, which should thwart his plans to win back Hope Logan (Annika Noelle) for now. Since Liam Spencer (Scott Clifton) still loves Hope, he may see his chance to fight for what they lost. The Bold and the Beautiful spoilers say Liam will work to get his love story with Hope back on track.

When Liam proposed to Hope, he delivered an ultimatum. Liam wanted Hope to cut ties with Thomas completely and stop being Douglas’ legal mother. Sharing custody meant that Thomas would always be interfering in their lives, and Liam just wasn’t OK with that.

However, Thomas’ comeuppance will convince Liam that Hope has truly seen the light. He may no longer be worried about Thomas causing problems if Hope doesn’t let him. Liam sees just how abusive Thomas can be toward his son. When it’s all said and done, Liam may admit they have a duty to protect Douglas.

Liam could count on being a family with Hope, Douglas and Beth Spencer (River Davidson and Madeline Valdez). He might even urge Hope to fight for full custody and cut Thomas out for Douglas’ sake. Regardless, Douglas wouldn’t be much happier about “Lope” than he is about Thomas and Zoe Buckingham’s (Kiara Barnes) relationship.

Douglas liked Liam once upon a time, but Thomas’ has twisted the boy’s mind to believe there’s only one way to true bliss. Due to Thomas’ manipulation, Douglas is all in on the idea of Mommy Hope being with his daddy. The Bold and the Beautiful spoilers suggest Douglas’ meltdowns may continue as long as Hope doesn’t cave in – and she won’t.

Will Douglas start taking after his father’s dark tendencies? Will he become a bit of a bad seed and try to sabotage Liam and Hope’s reunion? It’s a possibility to consider.

At some point, Douglas may not even need much guidance from his devious dad anymore. Thomas has clearly been a bad influence on him, so he may become an even bigger problem child in the months ahead.

B&B fans won’t want to miss all the excitement. Other news and updates will become available as time goes on, so don’t forget to drop by CDL frequently for all the latest Bold and the Beautiful spoilers.