The Bold and the Beautiful Spoilers: Monday, April 13 – Shauna Falls In Love With Ridge – Sally Panics Over Flo & Penny 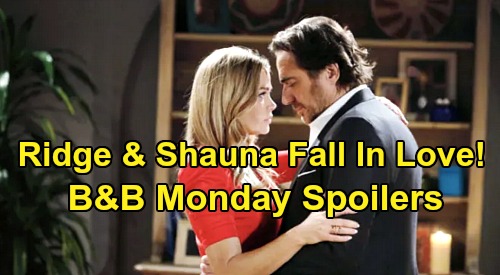 The Bold and the Beautiful spoilers for Monday, April 13, tease that the action is really heating up on the CBS soap. But before we get to that, we have a quick programming note. CBS currently plans to air an encore episode on Friday, April 10th, so the next new episode that B&B viewers will see will be on Monday, April 13th. And we’ve got the scoop on what you can expect on Monday’s episode right here.

First off, it appears that Shauna Fulton (Denise Richards) and Ridge Forrester (Thorsten Kaye) will continue enjoying their time together in Las Vegas. As B&B viewers know, they’re currently at Shauna’s apartment and Shauna is giving Ridge a tour of the city from a local’s perspective.

Both Shauna and Ridge seem to be thoroughly enjoying themselves as they get to know each other better. Well, according to B&B spoilers, Shauna will surprise Ridge with a VIP Las Vegas experience.

Shauna has been teasing about taking Ridge to an outlet mall, but perhaps she’s going to fake him out and take him out for a special evening instead. We’ll see what Shauna has up her sleeve here, but we suspect that Ridge will enjoy whatever Shauna has lined up for him.

The Bold and the Beautiful spoilers also indicate that Shauna will continue falling deeper in love with Ridge as the two spend time together, so it seems that Ridge might persuade Shauna to trust him with her feelings.

As B&B viewers will remember, Shauna is very much in love with Ridge, but she’s a bit guarded because she wants to protect herself in the event that Ridge gets back together with Brooke Forrester (Katherine Kelly Lang).

Meanwhile, on the new episode of B&B on Monday, April 13, Sally Spectra (Courtney Hope) will regroup with Dr. Penny Escobar (Monica Ruiz). Last we saw Sally, she was frustrated that her big plan to get affectionate with Wyatt Spencer (Darin Brooks) didn’t work.

As B&B viewers will remember, Sally wanted Wyatt to agree to be with her as a real couple in exchange for her agreeing to seek treatment options.

Well, Wyatt didn’t agree to Sally’s terms, and instead he gave Sally a talk about boundaries and how he’s with Flo Fulton (Katrina Bowden) now. That sent Sally running to Penny in frustration, and it sent Wyatt telling Flo all about Sally’s little ploy.

Now Flo is suspicious of Sally’s motives, and that’s not Sally’s only problem. Sally will get agitated on Monday’s new B&B episode when she realizes that Penny has had a talk with Flo.

B&B viewers will remember that Flo went to see Penny asking for information about Sally’s condition, and during the visit Flo expressed great concern about Sally. It looks like Flo’s visit will have really made an impact on Penny, and that will become apparent to Sally.

According to B&B spoilers, Sally will really be feeling anxious as she hears about Flo’s visit with Penny, and as she realizes that Penny is getting fed up with this charade.

Sally might even learn that Flo saw Penny’s sketches, which probably won’t help Sally’s nerves any. It looks like viewers can expect another heated exchange between Sally and Penny as Sally plots her next move.

Monday’s episode sounds great, so be sure to stay tuned, and we’ll be sure to let you know as we hear more B&B news. Stick with the CBS soap and remember that CDL is your place for all the hot B&B spoilers, daily recaps, and news.