The Bold and the Beautiful Spoilers: Monday, March 2: Wyatt Scores A Win As Sally Agrees To Move In – ‘Wally’ Love Blooming 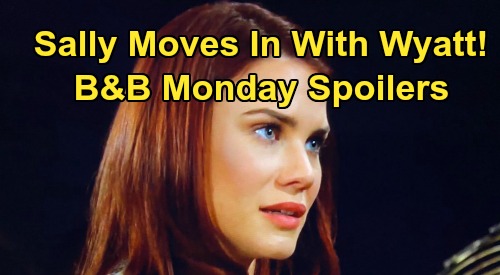 The Bold and the Beautiful spoilers for Monday, March 2, tease that Sally Spectra (Courtney Hope) will find herself feeling a bit suspicious. Sally is contemplating Wyatt Spencer’s (Darin Brooks) proposal. He wants her to move in with him right away so they can spend the rest of their lives together. Of course, that was music to Sally’s ears, but now she’s worried that Katie Logan (Heather Tom) might have told Wyatt about her terminal illness.

As B&B viewers know, Kate did indeed tell Wyatt all about Sally’s illness, but neither she nor Wyatt want Sally to know that Wyatt knows. From Wyatt’s perspective, he wants to do anything he can to help Sally in the final weeks of her life because he truly loves her, but he doesn’t want her to think that his desire to be with her is simply about charity or pity.

Well, on Monday’s B&B episode, Katie and Sally will continue their conversation at Forrester Creations, with Katie encouraging Sally to take Wyatt up on his offer to move in with him. But it seems that while they are talking, Katie will make a slip, during which she’ll say something that causes Sally to be suspicious of whether she’s really kept her confidence. That should lead to some tense moments.

Katie’s not exactly a skilled liar, so she’ll probably have to speak carefully in order to get out of the situation without outright lying to Sally. However, it looks like she’ll manage to wiggle her way out of the situation, as there’s currently no indication that Sally will pick up on the fact that Wyatt really knows about her illness. So, it seems that Katie will manage to cover her slip.

Meanwhile, on the new episode of B&B on Monday, March 2, Sally will do some soul searching. B&B viewers will remember that she told Wyatt what she needed some time to think about his proposal that she move back in with him. It seems that once she’s convinced that Katie didn’t spill the news about her illness to Wyatt, she’ll be ready to give Wyatt an answer.

The Bold and the Beautiful spoilers say that Sally will ultimately agree to Wyatt’s proposal, which means that we should see Sally move into the beach house soon. Of course, from here, both Sally and Wyatt will have some challenges ahead of themselves. For Sally, she’ll want to keep her condition from Wyatt a secret, even as they’re living together. That could wind up being tough to do, considering the she’s been experiencing serious physical symptoms.

And for Wyatt, he’ll want to keep the fact that he knows about Sally’s illness a secret until Sally feels comfortable enough to tell him the truth. It looks like they’ll both be playing a waiting game with each other, and it could get complicated. Then add to the mix that Wyatt will need to steer clear of Flo Fulton (Katrina Bowden) for the next few weeks, and it will probably get tough for everyone involved.

At any rate, it looks like we’ll see Wyatt try to support Sally as best he can, given what he knows and what Sally thinks he doesn’t know. Let’s hope that Sally comes around and finally admits to Wyatt what’s going on with her condition. Ongoing B&B spoilers say that Wyatt will give Sally a life worth living in her final weeks, but whether that means Sally will divulge her condition remains to be seen.

It looks like a lot of B&B drama is heating up for Monday’s episode, so stay tuned! Stick with the CBS soap and don’t forget to check back with CDL for the latest Bold and the Beautiful spoilers, updates, and news.