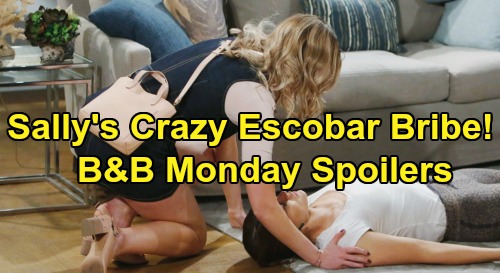 The Bold and the Beautiful spoilers recap for Monday, March 23, reveals that Wyatt Spencer (Darin Brooks) talked with Flo Fulton (Katrina Bowden), Bill Spencer (Don Diamont), and Katie Logan (Heather Tom) at Spencer Publications. Wyatt told them all that the truth all came out today, and that Sally Spectra (Courtney Hope) knows that they know about her terminal illness.

Wyatt noted that Sally was pretty upset, and that Sally had tried to leave, but then collapsed. He relayed that Sally agreed to stay put at the beach house for as long as she has left. Flo and Wyatt stepped aside, and Flo said that she’d like to go talk with Sally to offer her support. Flo thought it might help if Sally knew how much she supported her reunion with Wyatt.

Bill and Katie talked privately, and as they did Katie got a text from Brooke Forrester (Katherine Kelly Lang) saying that she and Ridge Forrester (Thorsten Kaye) were going to host a reunion party tonight at Brooke’s place. Bill flashed back to his steamy kiss with Brooke.

Meanwhile, at Wyatt’s beach house, Sally argued with Dr. Penny Escobar (Monica Ruiz). Sally told Penny to stick to the plan, and Penny lamented that her job was on the line. Sally said, “It’s not like I forced you into this,” and that Penny would be in big trouble if she panicked. Sally said to follow her lead and that they’d both get what they wanted.

Penny said that Sally wasn’t dying and that it was beyond cruel to make everyone think that she is. Penny thought it was time for them to tell people that Sally was cured. Sally said that Penny had agreed to “do this” in order to go into fashion, and that Katie believed every word of it, then blabbed just like Sally thought she would.

Penny kept arguing, saying that she should have turned Sally down when she pitched this crazy plan, and that Sally had roped her into this lie. Sally said that eventually she would be “cured,” but not today; all the pieces still needed to come together. Penny said that Sally had gotten what she wanted personally and at work.

Sally retorted that she didn’t have what she wanted yet, because Wyatt admitted that he had only pretended to end things with Flo, and that he was only with her because she was dying. “So, I still need to be dying,” Sally said, adding that it wouldn’t take much longer for Wyatt to remember how good they were together.

Sally then told Penny that if the real truth comes out, then she’ll never be able to get her a job at Forrester Creations. Penny said that she wanted to be in fashion more than anything, and that she’d be much happier there than in medicine. Sally told Penny to keep her eyes on the prize, and eventually Penny left.

Later, Sally was doing yoga stretches alone in the living room with headphones on. She was on her back on the floor when Flo arrived at the door. Flo knocked, but Sally didn’t hear her due to the headphones. Flo looked in and saw Sally on the floor, got alarmed, and raced in, startling Sally. Sally jumped up, totally surprised.

Next, at the Forrester mansion, Quinn Forrester (Rena Sofer) and Eric Forrester (John McCook) poured martinis. Quinn toasted to Brooke and Ridge…and to Brooke finally getting what she deserved. Eric then got a text from Brooke inviting them over to the reunion party later. Quinn mused that a party would be fun, especially if Bill and Katie were there. Later, Quinn looked at the video on her phone and smiled with satisfaction.

At Brooke’s mansion, she and Ridge kissed happily while the digital picture frame scrolled through pictures, then played the video of Bill and Brooke kissing. Brooke announced that Donna Logan (Jennifer Gareis) was coming over later to help plan their reunion party. Ridge then noticed a new picture on the digital frame and commented that Eric must have uploaded it.

Brooke thanked Ridge again for the gift, noting that it was a fun gift and that you never know what’s going to pop up next. They kissed, and once again the video of Bill and Brooke kissing played, but they didn’t see it. Donna arrived, and the three briefly talked party plans before Donna noticed the digital frame.

Ridge left for work, and Brooke showed Donna how to add a picture to the feed via an app. Donna humorously put her profile picture from her dating apps up on the feed, and the two women joked about that for few minutes. Donna then wanted to remove her picture from the feed, but neither she nor Brooke could figure out how to remove things from the feed.

Brooke left the room, and Donna examined the digital frame when suddenly the video of Bill and Brooke kissing popped up. Donna was absolutely horrified, and when Brooke returned to the room, Donna nervously started babbling about how Katie is their little sister and that it surely wouldn’t cross Brooke’s mind to make a move on Bill. Brooke got flustered and wondered what Donna was talking about.

Donna started crying, and she went on about how Katie thought she was dying and that she was leaving Will Spencer (Finnegan George) and Bill behind, then she came back to them. Donna went on about how Katie wanted to raise her son with the man she loves, and she asked Brooke why she’d do something to prevent that. Then, through tears, Donna cried out, “I know what you did, I saw you kiss Bill!”

That was a great episode of B&B, so make sure you stay tuned. We will be sure to update you as more Bold and the Beautiful news and spoilers become available. Remember, you can count on CDL as your trusted source for everything B&B.