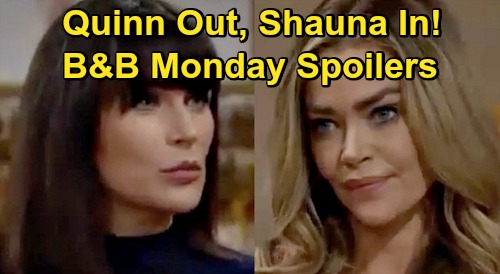 The Bold and the Beautiful spoilers for Monday, November 2, tease that Quinn Forrester (Rena Sofer) will have a seriously bad day. As B&B viewers know, Quinn has just begged Eric Forrester (John McCook) to give her one last chance and take her back, pointing out that Eric must be willing to forgive her since he hasn’t taken her portrait down from the wall of the mansion.

But then, Shauna Fulton (Denise Richards) strode down the staircase and now Quinn doesn’t know what to think.

Well, B&B spoilers indicate that Eric will indeed reject Quinn completely. Whether he’ll go so far to tell her that their marriage is over and done remains to be seen, but it seems clear that he’ll be 100% unwilling to grant Quinn her one last chance right then and there.

That’s going to devastate Quinn, who’s also going to want answers about what Shauna is doing in the mansion and with Eric. As it turns out, Quinn will learn that Shauna has been invited by Eric to move into the Forrester guesthouse, which is going to infuriate Quinn.

Here Quinn will be, exiled from the mansion and estranged from Eric, while Shauna is there in her house living the good life and presumably hanging out with Eric on a regular basis. It’s going to be way too much for Quinn to handle, and it seems that she’s going to realize that her former bestie could be a real threat.

Of course, whether Shauna ends up going after Eric romantically remains to be seen, but it’s certainly going to feel completely wrong to Quinn that Shauna is staying in HER home with HER husband.

Quinn might even get the feeling that Shauna wants some payback for how Quinn manipulated her into marrying Ridge Forrester (Thorsten Kaye) and messed up her life.

Meanwhile, on the new episode of B&B on Monday, November 2, a new face will appear on the Forrester Creations scene. Paris Buckingham (Diamond White) will visit her sister Zoe Buckingham (Kiara Barnes).

It looks like Paris will show up at Forrester Creations unexpectedly to surprise her sister, and in doing so she’ll meet Zende Forrester Dominguez (Delon de Metz) as well.

Interestingly, it seems that Paris will be very different from Zoe. According to B&B spoilers, Paris is a social worker, so she’s on a very different path career-wise than Zoe.

It should be interesting to see how Paris shakes things up for Zoe, especially if Paris and Zende start hitting it off right away.

Since Zoe’s now getting serious with Carter, it doesn’t seem like there will be much that she can say about who Zende dates or doesn’t date, but she might not want that person to be her sister!

It sounds like a lot of B&B drama is heating up for Monday’s episode, so stay tuned! We’ll be sure to give you updates as more B&B news comes in throughout the weekend.

Stick with the CBS soap and don’t forget to check CDL frequently so you don’t miss any of the latest Bold and the Beautiful spoilers, daily episode recaps, or news.