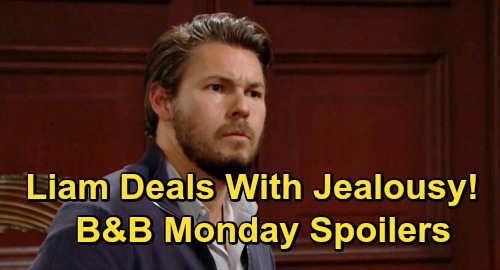 The Bold and the Beautiful spoilers for Monday, October 19, tease that Liam Spencer (Scott Clifton) will reel from what he’s just heard from Hope Spencer (Annika Noelle).

As B&B viewers know, Hope has just confronted Liam with the fact that his animosity toward John “Finn” Finnegan (Tanner Novlan) may stem from the fact that he’s jealous of Finn. Well, the look on Liam’s face when he heard that from Hope was one of utter surprise and shock.

It seems that Liam hasn’t yet stopped to consider that he could be feeling jealousy over Steffy Forrester (Jacqueline MacInnes Wood) moving on with another man.

Hope rightly pointed out that this is new territory for their extended family situation, and of course the influx of someone new into the mix would be expected to cause some discomfort here and there.

And since Liam has been the only guy in the middle of a love triangle with Hope and Steffy for so long, it’s probably hard for him to accept that all the fighting over his affections is over, and that Steffy is inviting someone new into her life.

It looks like Hope will lay all of this out for Liam, and according to B&B spoilers, Liam will be stunned by the suggestion.

After all, Liam thinks he has an iron-clad justification for not liking Finn. According to Liam, Finn is responsible for Steffy’s addiction because he got personally involved with Steffy and missed the warning signs.

But Hope will probably let Liam know in no uncertain terms that just because Finn was Steffy’s doctor doesn’t mean that he could predict that Steffy would become addicted and that he could tell when she was lying about getting painkillers from an illegal source.

We’ll see how much headway Hope makes with Liam on this issue, but maybe the whole discussion will cause Liam to do some soul-searching and really think about why he feels the way he feels.

Liam needs to see that he’s masking his true feelings by saying that he just wants to protect Kelly Spencer (Colette and Avalon Gray), but it sure doesn’t look like Hope is going to buy that nonsense.

Meanwhile, on the new episode of The Bold and the Beautiful on Monday, October 19, Zoe Buckingham (Kiara Barnes) will treat Zende Forrester Dominguez (Delon de Metz) to an impromptu fashion show.

As B&B viewers know, Zende and Zoe are currently in the Forrester design office, and Zende’s feeling like something’s missing from his design mockup that Hope wanted him to prepare for her.

Zoe promptly offered to model the design for Zende on the fly, and it looks like she’ll have a great time flirting and modeling the design. Of course, this is happening mere moments after Carter Walton (Lawrence Saint-Victor) urged Zoe to move into his new loft with him.

Zoe said that she needed to think about it, and now she’ll distract herself from the decision by flirting with Zende.

At any rate, Monday’s B&B spoilers say that Zende will be impressed by Zoe’s modeling ability and the little fashion show that she puts on for him.

It definitely looks like things are heating up between Zoe and Zende, and one wonders what this will ultimately do to Zoe’s burgeoning relationship with Carter.

Monday’s episode of B&B sounds terrific, so be sure to tune in! And stick with CDL over the weekend for all the latest Bold and the Beautiful updates. We’ve got the latest sizzling spoilers and news just for you!

“I want what’s best for you and Kelly, and I want to make sure you know how special you are.” 💙 Who’s ready to see what’s next for #Sinn? 🙋‍♀️🙋‍♂️ #BoldandBeautiful pic.twitter.com/DNhfLLab31