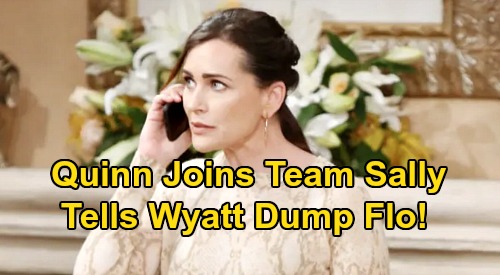 The Bold and the Beautiful (B&B) spoilers tease that Wyatt Spencer (Darin Brooks) will remain in a tight spot thanks to Sally Spectra (Courtney Hope). Sally’s made it clear to Wyatt that there’s no point in seeking treatment unless he’ll be with her. Wyatt tried to explain things to Sally and let her down gently, but he still feels terrible about all this.

While Flo Fulton (Katrina Bowden) busy trying to uncover Sally’s secrets and expose her lies, Wyatt will continue to battle guilt. He’s really broken up about Sally’s imminent death and wishes she would fight. It’ll be tough for Wyatt to watch Sally suffer knowing he has the power to get her into treatment.

Of course, B&B fans know Sally isn’t really dying, but Wyatt will continue to believe she is in the coming weeks. That’s why Wyatt will find it troubling when Flo’s adamant that Sally needs to move out. How can Wyatt just turn his back on Sally when he believes the end is near?

As Wyatt wrestles with his dilemma, he’ll get some advice from Katie Logan (Heather Tom) and Quinn Forrester (Rena Sofer). Katie will always be grateful to Flo for her life-saving kidney donation – and she certainly thinks Flo’s been a saint in how she’s handled all this Sally drama.

However, Katie’s also been with Sally throughout this “deadly” ordeal. The Bold and the Beautiful viewers know Katie’s been Sally’s biggest cheerleader and the one who’s really fought to make sure Sally’s final days are worth living. It’s doubtful Katie will change her tune about that without major evidence against Sally.

The Bold and the Beautiful spoilers say Katie will get some surprising backup during her upcoming conversation with Wyatt. It turns out Quinn will agree with Katie, which will leave Wyatt in shock.

Quinn is normally 100 percent “Team Flo,” but it seems she’ll join “Team Sally” in this case. Perhaps Quinn just won’t think it’s right for Wyatt to kick “dying” Sally out on the street.

What’ll happen after Quinn inevitably finds out about Sally’s scam? Although Quinn should be livid with Sally for duping Wyatt, part of her might connect with Sally as a schemer. Based on Sally’s behavior lately, she’s far more like Quinn than Flo.

Could Quinn cool off and remain on Sally’s side after the dust settles? As other B&B updates emerge, we’ll pass along other exciting news.

If Quinn wants someone who’ll go to great lengths to be with Wyatt, Sally’s the girl for him! CDL will have other great Bold and the Beautiful spoilers, news and updates to deliver, so be sure to stop in regularly.