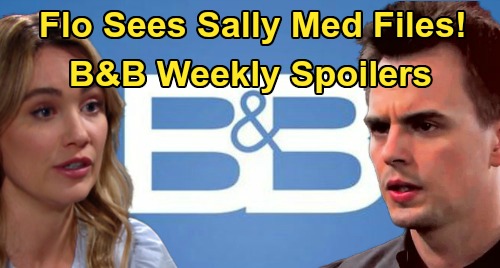 The Bold and the Beautiful (B&B) spoilers for week of April 13-17 tease that some surprises are in store. For starters, Sally Spectra (Courtney Hope) will have another tense conversation with Dr. Penny Escobar (Monica Ruiz). Penny’s comments during this discussion will let Sally know she’s got a real problem on her hands.

Dr. Escobar will be more convinced than ever that Sally’s fake terminal illness plot has to end NOW. Of course, Sally won’t be on board with since she hasn’t won Wyatt Spencer (Darin Brooks) over yet.

The Bold and the Beautiful spoilers say Sally will keep pushing Penny to stick to their deal, but the doc will bring up Flo Fulton (Katrina Bowden).

That’ll send Sally’s anxiety skyrocketing and make her see that Flo is once again messing things up for her. Sally will worry that Flo’s going to blow up her whole scam.

Meanwhile, Flo will deliver a shocking suggestion to Wyatt. The Bold and the Beautiful spoilers say Flo will want Sally to move out of Wyatt’s house, but he’ll feel like that’s awfully drastic.

Wyatt understands that Sally has problems with boundaries, but it’s not like he expects her to stick around much longer. There’ll probably be an argument about this being cruel to Sally, whose “dying” wish was to spend her final weeks with Wyatt.

However, it seems Wyatt will eventually cave in since Flo will later kick Sally out. Wyatt should back Flo up and leave Sally fuming. Once Sally gets updates all this, she’ll struggle to contain her rage for Wyatt’s girlfriend.

Flo will push Sally’s buttons and hope she can find a way to trick Sally into confessing, but Sally should keep up the ruse for now.

Even so, Flo will feel like there’s a shocker just waiting to be uncovered. It won’t be long until Flo takes another trip back to Dr. Escobar’s office. The Bold and the Beautiful spoilers say Flo will manage to sneak a quick look at Penny’s laptop. Flo will pull up Sally’s medical records, so that could mean bad news for Sally!

Meanwhile, Ridge Forrester (Thorsten Kaye) will get wild with Shauna Fulton (Denise Richards) in Vegas. Things will take an even wilder turn after Brooke Forrester (Katherine Kelly Lang) finds Ridge and takes him back to LA with her. Ridge will wake up with Brooke and most likely wonder what the heck happened last night.

Other Bold and the Beautiful spoilers state that Bill Spencer (Don Diamont) will corner Quinn Forrester (Rena Sofer) and deliver a vicious threat. Bill will make it clear that he didn’t appreciate Quinn turning that “Brill” kiss video into a scandal.

Quinn will be warned about what’s ahead – at least if she dares to cause more trouble. Unfortunately, trouble is Quinn’s middle name, so it’s safe to say more’s brewing!

Quinn already apologized to Katie for how she went about dropping the bomb, but she noted that it’d make everyone stop finding excuses for Brooke. It’s clear that Quinn’s intention was to hurt Brooke, not Katie. Either this or the B&B spoiler was meant to say Brooke or Quinn will simply tell Katie she’s not sorry for the exposure despite the damage.