The Bold and the Beautiful Spoilers: Sally and Wyatt Marry – Wedding Wish Granted Before Death, Flo Must Wait? 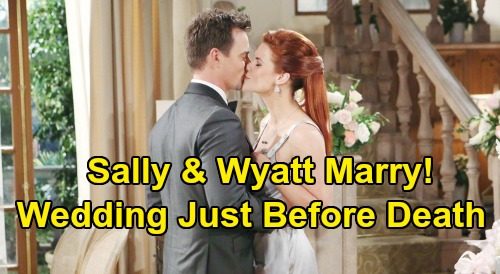 The Bold and the Beautiful (B&B) spoilers tease that Wyatt Spencer (Darin Brooks) will be a total mess when he learns what Sally Spectra (Courtney Hope) is facing. Based on a B&B preview video, it looks like Sally will learn she only has one month left to leave – at least without treatment to prolong the inevitable.

Katie Logan (Heather Tom) will grow increasingly concerned about Sally, who won’t cope with this news well at all. Sally will be spinning out over her imminent death despite the brave face she tries to put on.

As Sally’s symptoms worsen and her mindset grows bleaker, Katie will go against Sally’s wishes and spread the secret. She’ll start with Bill Spencer (Don Diamont) before ultimately telling Wyatt the truth.

Wyatt will struggle to believe that someone as fierce and full of life as Sally could have so little time left. Of course, Katie might point out that Sally could have a little more. She might think Wyatt’s the one person who could talk Sally into seeking treatment and extending her life.

Sally will indeed refuse treatment at first, but that doesn’t mean she’ll stick with that plan. She could change her mind if Wyatt pleads with her. Naturally, this will bring things to a screeching halt between Wyatt and Flo Fulton (Katrina Bowden), which Flo will completely understand. She’ll have sympathy for Sally and will want Wyatt to be there for her.

This could also bring Wyatt’s feelings for Sally roaring back. He may dump Flo temporarily so he can help Sally live life to the fullest. It’s easy to imagine Wyatt wanting to help Sally go on some fun adventures and experience things.

Could Wyatt even insist on marrying Sally? After all, Sally deserves to have a big wedding and a handsome groom before she dies. Sally’s words to Wyatt after she accidentally called him Liam, “We’re going to be OK…even if it kills me,” could prove to be true!

Flo might understand that as well and accept it since she’d still get Wyatt at the end of all this. Sally will clearly be expected to die. However, this IS a soap opera and people have been known to cheat death.

What if Wyatt marries Sally as way to grant a last wish and then she ends up surviving by some soapy miracle? Drama!!!

Then again, it’s also possible The Bold and the Beautiful writers will indeed use it as sort of a parting gift to Sally. Either way, we wouldn’t be surprised if wedding bells are around the corner for Sally and Wyatt. Even if their love story’s about to end for good, they deserve this part of their journey together.