BY Heather Hughes on February 9, 2020 | Comments: one comment
Related : Soap Opera, Spoiler, Television, The Bold and the Beautiful 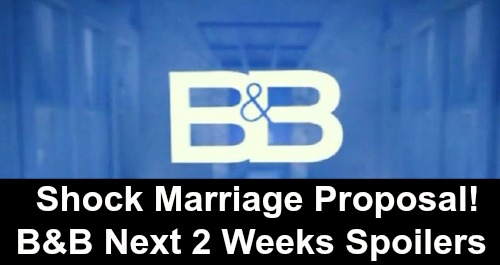 The Bold and the Beautiful (B&B) spoilers for the next two weeks tease that some bombshells are brewing. During the week of February 10-14, Sally Spectra (Courtney) will be hit with a blow she never expected. It turns out Sally is dying and seemingly only has one left month to live.

Katie Logan (Heather Tom) will console Sally as she grapples with the news, but she won’t think her support is enough. After confiding in Bill Spencer (Don Diamont), Katie will stun Wyatt with the heartbreaking truth. He’ll reel as he realizes death is inevitable for Sally and will certainly want to be there for her.

Sally won’t be interested in treatment, but Katie will work to change her mind. She’ll try to convince Sally that she’s a fighter and should tackle this head-on.

Next, Vinny Walker (Joe LoCicero) will try to talk some sense into Thomas Forrester (Matthew Atkinson). He’ll see the toll Thomas’ plan is taking on Douglas Forrester (Henry Joseph Samiri), so he’ll advise against pursuing this angle any further.

However, Thomas will stick to his guns on this. He’ll think the end justifies the means. Thomas will lay out exactly how he intends to win Hope Logan (Annika Noelle) over.

Thomas will suggest it won’t be long now until he’s a united family with Hope and Douglas. Thomas may think a little minor pain for Douglas now will be worth it once Mommy Hope’s a permanent fixture in their home.

The Bold and the Beautiful spoilers say Thomas will pull out all the stops for a big birthday bash. He’ll surprise Zoe Buckingham (Kiara Barnes), who’ll be touched that Thomas would do something so special for her.

Hope will be taken aback when she sees Thomas’ extravagant gift – and poor Douglas will have a bit of a meltdown. The way Douglas will see it, Zoe will be moving in on Hope’s mother territory.

Hope will do her best to comfort the kid before she turns her attention to Thomas. She’ll call him out for flaunting his relationship with Zoe and making things harder on Douglas.

Hope may insist that she wants Thomas to move on, but it’s important to be mindful of Douglas’ feelings. There’s a right way and a wrong way to do this.

Of course, Thomas will manipulate Hope as usual and contend that she’s the one who’s hurting Douglas. Hope refuses to be a family, so Thomas will suggest she’s given him no choice.

As for Zoe, she’ll hope to bond with Douglas somewhat. Zoe will try to butter Douglas up with some candy, but that won’t be enough to convince him that Zoe’s as great as Hope is.

Meanwhile, Ridge Forrester (Thorsten Kaye) and Brooke Forrester (Katherine Kelly Lang) will face more conflict. Brooke will be adamant that Thomas is the reason for all their problems, but Ridge just won’t agree with that.

During the week of February 17-21, Thomas’ dirty tricks will continue with a Forrester family dinner. He’ll let – or perhaps encourage – Douglas steal the show and make quite a statement with his actions. If Hope’s on hand to watch this, it could complicate matters even further.

Over with Liam Spencer (Scott Clifton), B&B spoilers say he’ll push Zoe to see the light when it comes to Thomas. Liam will urge Zoe to accept that Thomas is using her. He’ll share some info that indeed makes Zoe question Thomas’ interest in her.

Back with Sally, she’ll need a little cheering up. Katie will do her part while Flo does the same for Wyatt. He’ll be down in the dumps over Sally’s diagnosis, but Flo will try to make him feel better.

Katie will wonder if sharing Sally’s secret was the right call, but there’ll be no point in second-guessing it once the cat’s out of the bag. Sally’s bound to be upset, but she should get over it eventually.

The Bold and the Beautiful spoilers say a marriage proposal is also coming up, but keep in mind that preemptions pushed back some episodes. That could mean this proposal won’t play out just yet, but it’ll happen onscreen at some point.

It sounds like some hot drama’s ahead, so don’t miss what’s in store. We’ll give you updates as other B&B details emerge. Stay tuned to the CBS soap and don’t forget to check CDL often for the latest Bold and the Beautiful spoilers, updates and news.