The Bold and the Beautiful Spoilers: Sally’s Not Dying – See Which B&B Character Will Die In 2020?

BY hellodrdavis on March 28, 2020 | Comments: one comment
Related : Soap Opera, Spoiler, Television, The Bold and the Beautiful 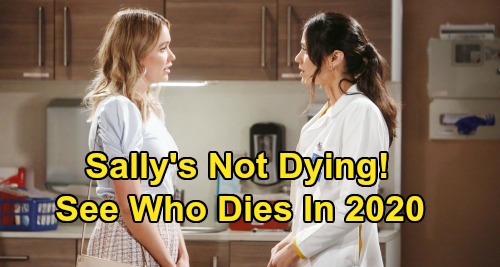 The Bold and the Beautiful (B&B) spoilers tease that Sally Spectra (Courtney Hope) has been faking everyone out. As B&B viewers know, Sally’s been stringing every along with her supposed terminal illness. With her friend Dr. Penny Escobar (Monica Ruiz) in her pocket, she’s been able to fake her diagnosis and her symptoms even though she’s apparently going to be just fine.

But we can’t help but remember back to the previews for the new year, when it was stated quite clearly by TPTB that a “beloved” character would die in 2020. Shortly thereafter, spoilers started to spread about Sally being diagnosed with a terminal illness, and then it happened on the show. And it became pretty apparent (or so everyone thought) about which character was dying.

And now that it’s become clear that Sally isn’t actually dying, that begs the question – If it’s not Sally who’s dying, then who will meet their maker in 2020? Well, one possibility is that it will be someone closely connected to Sally, who will die as a result of her big scam…like Dr Escobar. Now, granted, Dr. Escobar seems way too new on the show to be considered a “beloved” character, but we’ll consider her anyway.

After all, she seems to be the character in the most imminent danger from Sally at this point, and Sally could end up being quite dangerous. Seriously, if Sally’s willing to fake a terminal illness to get a man, who know what else she’d do, especially if someone like Dr. Escobar threatens to tell the truth about what’s really going on.

B&B spoilers indicate that Flo Fulton (Katrina Bowden) will soon pay Dr. Escobar a surprise visit and pepper her with questions about Sally’s condition. Dr. Escobar could get close to cracking under the pressure, and Sally could realize this and decide to permanently eliminate the problem. It’s a terrible thought, but Sally could resort to murder to protect her secret.

And speaking of Flo, it’s always possible that Sally might decide that the only way she can ultimately get Wyatt Spencer (Darin Brooks) is to permanently get rid of the competition. Flo would certainly qualify as a “beloved” character far more than Dr. Escobar would, especially since she’s a Logan and tied to an integral family on the show.

Of course, there could be a surprise twist coming, with Sally actually getting sick, or perhaps dying in the process of trying to kill Dr. Escobar or Flo. Or perhaps the B&B death in 2020 is some other character altogether – someone like Eric Forrester (John McCook) or even Pam Douglas (Alley Mills), who would certainly qualify as “beloved.” It could be a death that simply comes out of nowhere!

We’ll see what happens, but it seems that someone is destined to die in 2020. Who do you think it will be? Stay tuned to the Bold and the Beautiful, and don’t forget to check CDL often for the latest B&B spoilers, recaps, and updates. We’re your go-to source for the latest soap news!