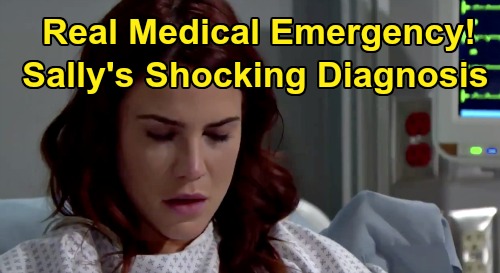 The Bold and the Beautiful (B&B) spoilers tease that the jig will be up for Sally Spectra (Courtney Hope). After Sally’s terminal illness scam is exposed and Wyatt discovers Flo Fulton’s (Katrina Bowden) kidnapping ordeal, a heated confrontation will go down. It looks like this will play out following Flo’s rescue.

As B&B fans can imagine, Wyatt will be furious over Sally’s wild plan. Sally claimed she was dying in hopes of pulling Wyatt closer, so Wyatt’s bound to rant about how insane that is.

By the time this faceoff goes down, Sally’s pregnancy trap will have failed, too. Wyatt may point out that Sally isn’t acting like the woman he once knew and loved. This is crazy!

Sally will deliver a desperate plea for forgiveness, but Wyatt won’t be quick to let this go. He’ll wonder if Sally really expects him to love her after the way she’s lied to him. Wyatt will blast Sally and most likely argue that faking a deadly illness is one of the worst things she could do.

Sally messed with Wyatt’s emotions when she isn’t sick at all – or is she? Wyatt may have a hard time knowing for sure after Sally keels over right in front of him. The Bold and the Beautiful spoilers say Sally will collapse – most likely in Wyatt’s arms.

Wyatt may think Sally’s faking it at first, but he’ll eventually realize something’s genuinely wrong. Sally will suffer through a real medical emergency, so that’ll put her in the hospital during the week of July 27-31.

B&B’s latest preview video shows Flo freaking out in what appears to be the waiting room. “I can’t believe this is happening,” Flo says in the clip. Flo caused Sally’s tumble, which led to Sally getting knocked out briefly.

That head injury could play a role in Sally’s upcoming collapse, but there may actually be a serious underlying medical issue to blame.

That would make sense considering how B&B’s been playing up Sally’s instability and out-of-character behavior. The Bold and the Beautiful spoilers say Sally will undergo a thorough examination, so maybe she’ll get a correct diagnosis this time around. It’s clear that Sally’s been up against more than just stress!