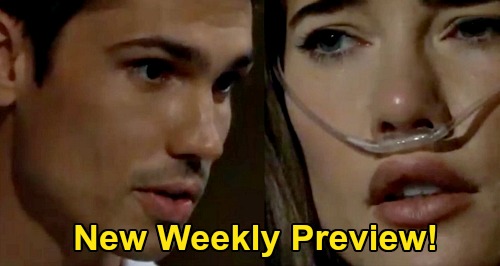 The Bold and the Beautiful spoilers preview video tease that viewers got a sneak peek of some of the upcoming action for this week after Monday’s B&B episode, July 20. As you might know if you caught the first new B&B episode on Monday, July 20th, it was all designed to catch viewers up on where the storylines stand on the show, so that new action can come our way starting on Tuesday, July 21st.

At the end of Monday’s episode, viewers got to see an extended preview (see below) of what’s upcoming on B&B, and we’ve got the scoop about all of it right here.

First, Wyatt Spencer (Darin Brooks) was shown kicking down the door of what appears to be Sally Spectra’s (Courtney Hope) apartment, which would make sense as B&B spoilers say that Flo Fulton (Katrina Bowden) will be chained to a radiator there and Flo will send Wyatt a “911” type text while she’s being held captive by Sally.

Speaking of Flo being tied to that radiator, Flo is shown managing to catch Sally’s ankle and Sally falls big time, hitting her head hard on the floor.

Later, it looks like Flo is untied and ok, as she tells someone, “I can’t believe this is happening,” while Sally is shown in a hospital bed being asked by a doctor if she’s ready for visitors.

It appears that Sally got knocked on the head good enough to land her in the hospital…where it’s probably going to become apparent pretty quickly that she’s NOT dying.

Shauna tells Ridge that she’s “so happy,” but Ridge looks pretty blindsided but the whole thing. It looks like Ridge and Shauna officially got married during their drunken evening out in Vegas after all.

Others will apparently learn about the Vegas wedding, as Eric Forrester (John McCook) is shown saying, “That’s not possible,” as Quinn Forrester (Rena Sofer) looks on with a worried expression.

And Brooke Forrester (Katherine Kelly Lang) is shown crying, saying, “Don’t tell me that you don’t remember!” One would presume that Brooke is taking to Ridge about his marriage to Shauna.

Ridge is then shown telling Steffy that his marriage to Brooke is over, while Quinn’s over at Spencer Publications telling Bill Spencer (Don Diamont) that he shouldn’t give up hope on Brooke.

Meanwhile, Steffy Forrester (Jacqueline MacInnes Wood) is shown on her motorbike colliding with a car, which B&B spoilers say will turn out to be Bill’s car. The scene flashes to the hospital, where B&B viewers get their first glimpse of Dr. John “Finn” Finnegan (Tanner Novlan) who’s about to go into Steffy’s room.

Next, Finn is shown at Steffy’s bedside, saying “You’re awake and alert, that’s a very good sign,” as Steffy wakes up looking groggy and gazes fuzzily at Finn. Bill is shown being quizzed by Detective Alex Sanchez (Jeremy Ray Valdez) about the accident, while Bill appears to tell Brooke that “it just happened so fast, I couldn’t react” while totally in tears.

Next, Hope Logan (Annika Noelle) and Liam Spencer (Scott Clifton) agree that they did a stellar job at something – they could be talking about their plan to expose Thomas Forrester (Matthew Atkinson) here. Additionally, a shirtless Carter Walton (Lawrence Saint-Victor) appears in the Forrester CEO office, with Zoe Buckingham (Kiara Barnes) happily catching a glimpse.

Brooke is also shown scantily clad, wearing just lingerie and attempting to surprise Ridge in bed, although Ridge doesn’t look happy about the whole scene. In fact, we suspect that it’s likely that Ridge will have just learned about his marriage to Shauna right before Brooke decides to seduce him. What a mess. It will be all happiness and passion for Wyatt and Flo, though, as they’re shown making out on the couch at Wyatt’s place – which is further evidence that Sally’s scheme will be crashing and burning soon.

Finally, Thomas makes an appearance in the preview montage, in a scruffy beard and longish hair. Thomas tells someone over at Steffy’s place to “take care of my sister.” Could he be talking to Finn? And speaking of Finn, he and Steffy are shown warmly smiling at each other, in what looks to be the beginning of their hot romance.

It sure looks like a lot of great action is coming our way on B&B in the next few days. Check out our daily recaps so you don’t miss a thing, and be sure to keep CDL at the ready for all of the newest B&B spoilers, news, and updates.

🚨SNEAK PEEK ALERT🚨 Here’s what you can expect to see on all-new episodes of #BoldandBeautiful. pic.twitter.com/HLWr9vUk6v