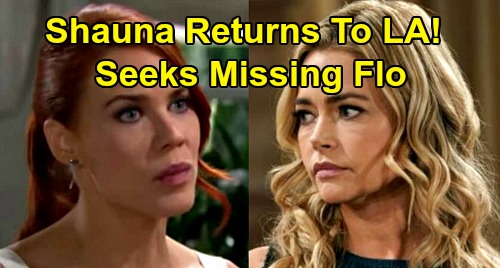 The Bold and the Beautiful (B&B) spoilers tease that a storyline collision may be coming up. B&B fans know Sally Spectra (Courtney Hope) is duping Wyatt Spencer (Darin Brooks) with her fake terminal illness. Flo Fulton’s (Katrina Bowden) on the verge of proving the scam, which will put her life in danger.

After Dr. Penny Escobar (Monica Ruiz) strikes a blow that knocks Flo out, Sally and Penny will have to do something drastic. They can’t just let Flo wake up and blab everything to Wyatt. It looks like Penny and Sally will hold Flo captive, which will give Sally a chance to win Wyatt over in peace.

However, that decision should also bring a shocking key player back in the picture. If Flo goes missing, there’s one person who’s bound to have questions: her mom!

At the moment, Shauna Fulton (Denise Richards) doesn’t plan to return to Los Angeles. The idea of being around Ridge Forrester (Thorsten Kaye) is just too painful since he clearly can’t let go of Brooke Forrester (Katherine Kelly Lang).

Of course, Shauna may have no choice but to return once Flo’s missing. She may decide to head back to LA and hopefully crack this case. Shauna might be the only one determined enough to get some real answers.

Sally and Penny can cook up some story for why Flo’s gone. They might even steal Flo’s phone and text from it – just to give the illusion that Flo’s staying away by choice. Sally might convince Wyatt that Flo wanted to make this easier for him and give them this time together.

Shauna could be Sally’s biggest threat if she doesn’t buy that. She may see red flags in Flo’s texts or express concern when Flo won’t actually pick up the phone. Shauna would certainly be alarmed if she demanded it and Flo refused. This mother knows her daughter quite well, so she’s sure to realize something’s off here.

Shauna may want to solve the mystery of Flo’s disappearance, which could put her back in Ridge’s orbit. Once Shauna’s in LA again, that might mean more trouble for Brooke! The Bold and the Beautiful spoilers hint that storylines may collide – and it could all start when Flo goes off the grid.